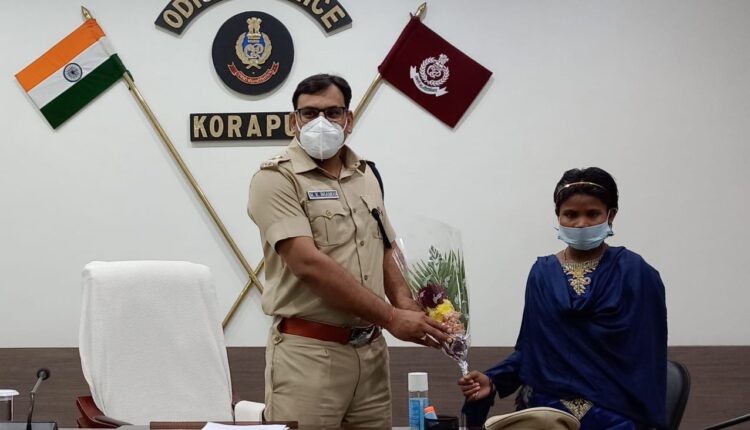 Koraput:  Woman Maoist Rame Madkami, who had Rs 4 lakh  cash reward on her head, today surrendered before the Koraput police.

Madkami, who had joined the of the outlawed CPI (Maoist) seven years ago,  had been working as an Area Commander Member (ACM) of the protection party of  of dreaded Maoist leader Akkiraju Haragopal alias RK of AOBSZC Central Committee Member organization.

A resident of Kurub village  under Kalimela police limits in Malkangiri district, Madkami  worked in different areas of Koraput and Malkangiri and involved in several incidences of violence.

“She was inducted to the CPI (Maoist) organization in 2013 at the age of 16 in gross violation of child rights. Deprived of formal education, Madkami was given military training and was armed with a .303 rifle by the part. After getting promotion to the rank of ACM, she was armed with a INSAS Rifle,” said a release issued by the district police.

Seeing the development works carried out out by the state Government in Swabhiman Anchal (cut-off areas) of Malkangiri district and realizing the futility of the violent path of Naxalism, Madkami decided to join the mainstream.

Besides, she was also fed up with the anti-social attitude and  unnecessary civilian killings by the  party. She also realized that Maoist leaders are using innocent tribals for their own vested interests. Hence, she decided to shun violence and join the mainstream, said the police .