Why Chumki is a Woman of substance ? 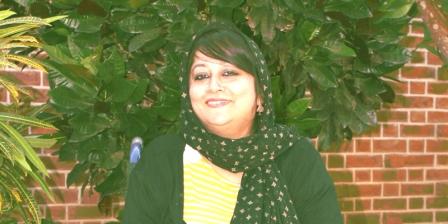 When one sees Chumki Datta, all they can probably register is a person on a wheelchair who probably wishes she could walk. But for Chumki, it is her wheelchair that brought her closer to independence.

It was on a cold night in 2003, when she remembers getting into her car around 2 a.m. By 3 a.m., she found herself on an operating table. She had met with an accident and was left a paraplegic.

“Life changes in a fraction of seconds,” she says, smiling.“So one should always be grateful.”

Today, Chumki introduces herself through her disability, without an ounce of self-pity.

“All power is within you, you can do anything and everything.” As she quotes Vivekananda for us, we see how true she stands to her name. ‘Chumki’ in Bengali means to glitter and shine and she did exactly that in front of what destiny posed for her.

But this powerhouse did have questions clouding her thoughts, like ‘Why her?’ and ‘What next?’

And during these testing times, Chumki was supported much by her husband, Tathagata Datta. She says that it was his positivity that got her to believe that nothing has changed, and everything could just be as it is.

Her husband is no more today, but she continues to embody his learning and spirit by choosing to stay in the forests of Berhampur—where the couple had shifted to a few years ago—all by herself.

Starting up when none did

But Chumki’s story starts way before 2003. Independence and standing strong wasn’t new to Chumki; she had done all of it before.

Educated in Loreto House, Kolkata and having specialised in advertising, she became a model for leading saree brands and a cricketer in her school days. After getting married, she moved to Bhubaneshwar and chose to start up on her own.

The year was 1993, when a woman starting up was unheard of, especially in smaller towns like Bhubaneshwar.

Chumki chased her dreams of starting up and opened an advertising agency called Mastermind Advertising Services. She agrees it was difficult to be different in the crowd. To be socialising in rooms filled with men and still make a mark on the male-dominated society was a tall order. But one can say that Chumki didn’t just stand against the tide; she rode it.

Her agency today is named amongst the top 10 advertising and brand consulting firms in . She consults clients from consumer retail and corporate sector, including Syndicate Jewellers and Hindustan Electronics.

Heading a team of eight now, Chumki believes hard work and perseverance is the key. Along with her advertising agency, she also owns Excel Homes, a corporate guest house in Bhubaneshwar and sits on the board of Shanta Memorial Rehabilitation Centre, which deals with the empowerment of women with disability. Chumki stands higher today for her relentless spirit, invoking a desire of never giving up.

“There are times when people take financial advantage of you, they get their projects done and never pay, thinking I can’t travel,” she says.

But what they forget to see is the strength, determination and perseverance Chumki brings to the table.

Today, Chumki is an advocate of accessibility and empowering women with disability in villages around Behrampur and plans to introduce multiple initiatives. She is vociferous about the government creating separate courts for the disabled.  She keeps in touch with most women through WhatsApp groups and thinks it’s time the government starts introducing disabled-friendly areas in public spaces.

“You don’t tend to go for movies because it’s not disabled-friendly. Small things like hospital X-ray tables aren’t accessible. It is embarrassing when someone has to pick you up. You do not want to be thrown around like a bag of potatoes,” Chumki explains.

She plans to have a meetup for disabled women in January.

Chumki, for us, is a doer who inspires. She has travelled through experiences and perspectives and has emerged stronger, personifying the never-give-up spirit, even when things get overwhelmingly difficult and seemingly impossible to cope with.

So we celebrate the spirit of Chumki Datta, the woman who laughs in the face of adversity because she knows it cannot break her.

Paws and Boots – Patriots March together on Republic Day celebrations

Odisha to have Cyber Forensic Division; the first in eastern India