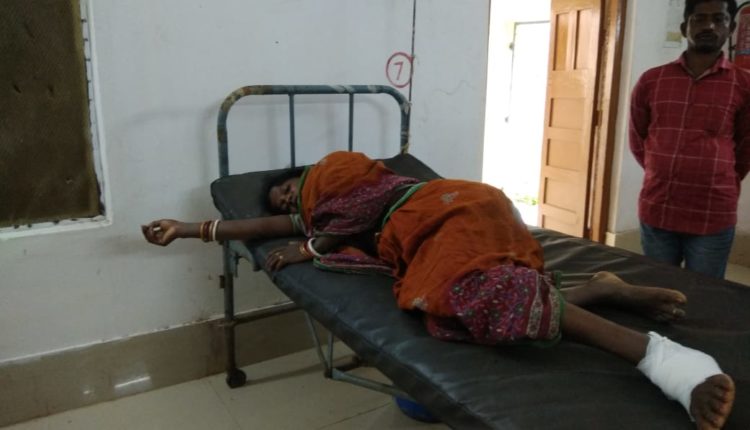 Kendrapara: A woman had a narrow escape from the clutch of a giant crocodile sustaining minor injuries at Rajkanika area in Odisha’s Kendrapara district today.

The victim was identified as Sajani Mallick, a resident of Khunta village under Rajkanika block.

The incident occurred when Sajani, a daily labourer, had been to the Baitarani River alone to clean her utensils following lunch along with her co-workers at a paddy field. A saltwater crocodile suddenly attacked by dragging her legs into the river.

The scared woman held a tree tightly and defended herself from becoming the victim. The scuffle lasted for an hour. When she did not return to the field, her co-workers started searching her near the river and found her struggling with a crocodile.

Without making a delay, one of her co-workers pushed the reptile off the river bank with a stick and managed to rescue her.

The victim was rushed to the Community Health Centre (CHC), Rajkanika, with injury on her left foot for treatment.

“I was unaware about presence of a crocodile in the water. While I was cleaning my utensils, the giant reptile attacked me with its tail and I was hit with a tree. I struggled for an hour to save my life by holding the tree and shouted for help. After hearing my scream, one co-worker rushed to the site and warded off the crocodile with a stick,” said the frightened victim.

Worth mentioning, the crocodile attacks are rampant at the human habitat adjacent to Bhitarkanika Wildlife Sanctuary located on banks of the Baitarani River in Kendrapara district.

This is the second incident in the coastal Odisha district barely after a day where a youth survived a crocodile attack at Indupur village.