The clip showed a female co-passenger thrashing Archana with a shoe after some people claimed that she was carrying a cattle head, cattle bones, vermilion and rice for sorcery practice and threw rice at them when they asked her about it. 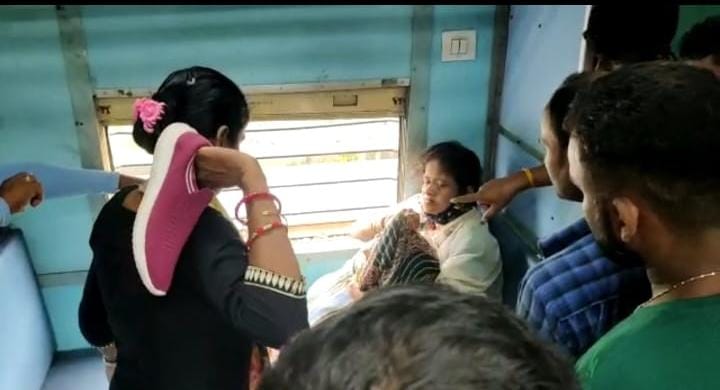 Berhampur: In a shocking incident, a woman was beaten up mercilessly with a shoe inside a train over suspected sorcery practice in Odisha, a video of which has gone viral in social media.

The woman, who identified herself as Archana Mishra in the video, was going to Bhubaneswar from Berhampur on Palasa-Bhubaneswar passenger train when the incident took place.

The clip showed a female co-passenger thrashing Archana with a shoe after some people claimed that she was carrying a cattle head, cattle bones, vermilion and rice for sorcery practice and threw rice at them when they asked her about it.

In the video, the female passenger was seen hitting Archana repeatedly with a shoe after the latter reportedly threatened to throw kerosene on her.  While some onlookers tried to intervene and pacify the situation, some others were seen encouraging the assault. Archana too was seen with a chappal in her hand, trying to hit the passenger back.

After Railway Police arrived on getting the information, the female passenger along with others alleged that Archana was carrying cattle head and throwing rice on people who questioned her.

While Archana refuted the allegations, she alleged that the passengers tried to snatch her vanity bag and took away her Aadhaar and PAN card and even tried to steal her money. “I was coming from my father’s place in Berhampur. The passenger who is claiming that I threw rice on him was in fact trying to snatch my vanity bag and steal money. These passengers have taken my Aadhaar, voter ID and PAN cards as well. I just have clothes in my bag. The rice spilled over when they tried to snatch my belongings. These people are framing me for no reason,” she said in the video.  The passengers on the other hand told the police that she was lying.

As per reports, the situation was brought under control after police intervention and Archana later alighted at Bhubaneswar station.

Bhubaneswar: Two die by suicide as they consume poison inside house in Bharatpur