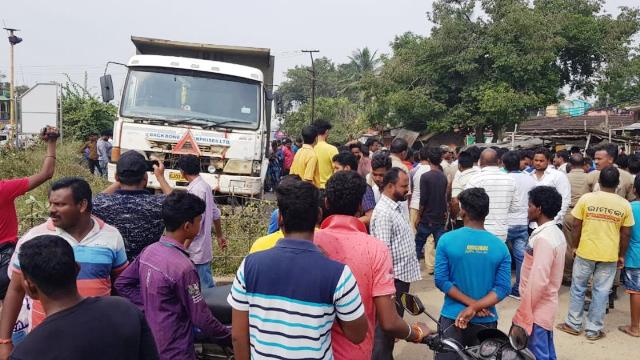 Bhubaneswar: A woman and a youth died in two separate road accidents in Odisha’s Baripada and Sundargarh today.

A 60-year-old woman was killed after a truck ran over her at Murgabadi Chhak in Baripada town around 11 am today. The deceased has been identified as Sabita Ghosh of Bahalaguda village.

She was on the way to a hospital with her son-in-law on a motorcycle when a speeding truck hit the two-wheeler and crushed the woman’s head resulting in her death on the spot. The driver of the truck fled the place after the accident.

In another incident, a head-on collision between a motorcycle and a car claimed life of a youth and left another critically injured near Rangiamunda Chhak in Sundargarh district.

One Rajat Nayak (20) of Lefripada and his friend Krushna Narayan Sahu (21) were heading towards Sundargarh on a bike for shopping when they tried to overtake a bus during which the motorcycle collided head-on with a car.

While Rajat died on the spot under the impact of the collision, Krushna sustained grievious injuries and was admitted to Sundargarh district headquarters hospital.

Close shave for woman in crocodile attack in Odisha’s Kendrapara