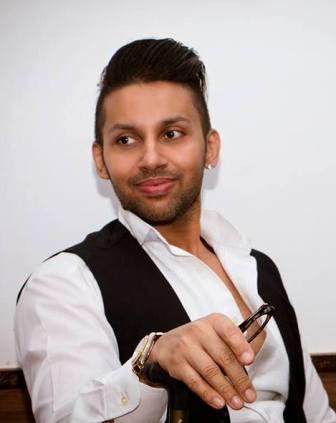 The name is Indian, the garments are international haute couture and the man is an Odia.

Pritam Panda, the stylish and dapper international couturier dresses up women with distinct panache. His long list of global clients prove that creativity has no caste, creed and religion. His creations are available in four labels; of which Raas is dedicated to promote indigenous weavers of Odisha. His Dubai team of nine head design assistants, 12 design assistants, eight office assistants, 44 skilled master tailors, master seamstress and artisans help him in his design endeavours.

At a tender age of 19, he had the guts to spread his wings and fly into the unknown, cut-throat terrain of fashion. Balasore-Kolkatta-Dubai and it has been a roller coaster ride with life experiences that has helped Pritam hone his skills. His dreams took shape in the form of VKY house of fashion which he started with his sister Payal in 2003 in Kolkatta. A small town teenager, an NIFT drop-out, with empty pockets, eyes full of dreams and a passion for fashion made him juggle three part-time jobs to make ends meetbut he remained undaunted.

Lady Luck smiled and rewarded his sincerity with a short internship at Alexander McQuinn design studio in London. This was the first baby step into the huge glamour world and Pritam grabbed the opportunity to grow in leaps and bounds.

His irresistible, exquisite creations had a magnetic pull and celebrities from Bollywood and Tollywood like Bipasha Basu, Celina Jaitley , Koena  Mitra and Mallika Sherawat, could not resist trying them on and thus, became his regular clients. The list kept growing as other divas like Mallaika Arora Khan, Chitrangada Singh and Shreya Ghoshal joined his clientele. Fashion stores in Hyderabad, Kolkatta, Mumbai and Delhi vied with each other to have ‘PP’s’ creations on their racks.

2009 was when he shifted base to Dubai, the city of gold. In spite of not knowing a single soul in a foreign land, he carved a niche for himself. Etiole La boutique a famous store gave him a rack and featured him in the Prestige magazine of their 2009 issue. Later, he was nominated for Youth Inspirazione-2012 and the Best Woman’s Designer Label award.

International celebrity singer Dolly Parton fell in love with his dresses and Pritam has never looked back since then. With the Chopard World Young Entrepreneur award, access was easy to the crème de la crème of Dubai and the most elegant Queen Raania, became one of his most loyal patrons.

His first showcase 2013 was in Italy. His autumn-winter line at Napoli, bagged him the Murex D’Or award for being the Youth Inspiration. In 2015, he was invited to showcase a collection at the Golden Lion Cannes Film Festival.

From a small town boy in Balasore to displaying his haute couture at Harrods in Bradford, London, Dubai, Tehran, Beirut, London, Manchester, Phuket and Seoul, Pritam has indeed come a long way.

Guwahati: Two decades ago and now