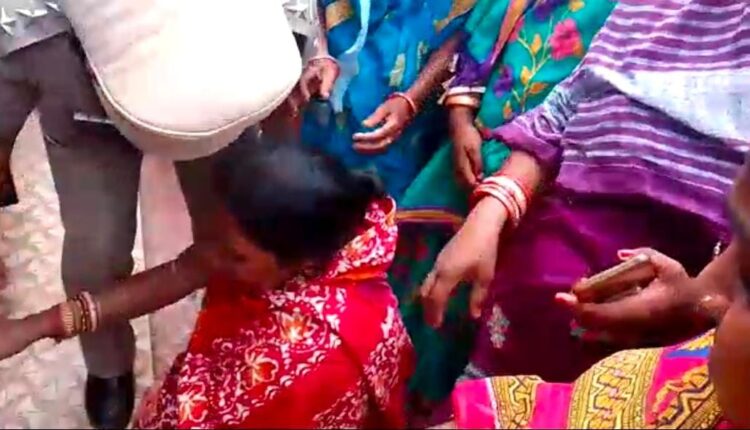 Balasore: Alleging rising cases of domestic violence, hundreds of women from Naichanpur village have taken to protest and demanded complete ban on liquour sale in Bahanaga block of Odisha’s Balasore district. Falling on bended knees before the Collector at a grievance redressal meeting on Monday, the women agitators complained that easy availability of alchohol is fuelling abusive behaviour of their husbands and distress in their homes. They urged complete ban of liquor outlets or distribution in the block besides appealing to let off village ward members who had been arrested in connection with torching of a liquor shop owner’s vehicle.

“The villagers have no role in the incident. It is a ploy to trap us by the shop owner who sent his men to burn down his vehicle. We are being framed for opposing his liquor outlet,” the women had claimed before Collector Dattatraya Bhausaheb Shinde and were pacified after being assured of necessary action as per law.

Their desperate request came after violent clashes erupted in the village over opening of  a liquor shop recently. Sources said a licensed liquor trader opened an oulet in ward 14 of Naichanpur which had met with lot of opposition from the villagers and had to be shut down. The owner had approached the High Court and after getting permission, had again opened the shop amid police security on Saturday.

As local resentment was building up over the issue, a group of men who were supporting opening of the shop came to the village the next day reportedly attacked the resisting locals with sharp weapons. They also misbehaved with the women. Villagers however managed to detain a youth from the group and thrashed him. The boy confessed that they were sent by the liquor shop owner to intimidate those who were resisting his move, a video of which has gone viral on social media.

Meanwhile, miscreants set the liquor shop owner’s on fire later that night. While no casualty was reported, police had arrested seven persons including three women in this connection.