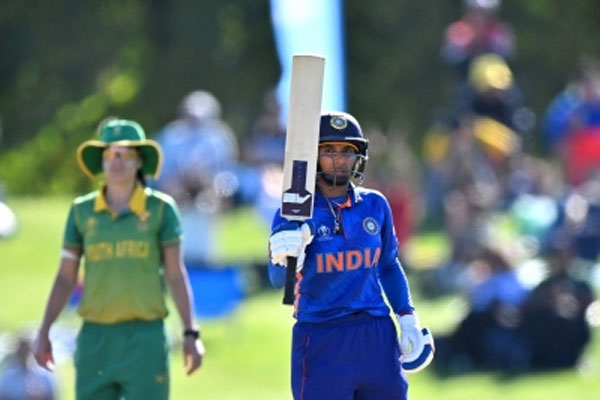 Share
Christchurch: Sizzling half-centuries from Smriti Mandhana, Mithali Raj and Shafali Verma took India to a respectable 274/7 in a must-win match against South Africa in the ICC Women’s Cricket World Cup at Hagley Oval on Sunday.

Sunday’s match, on a pitch used in the match between New Zealand and Pakistan on Saturday, was encouraging towards stroke play, which was justified by India after Raj won the toss and elected to bat first.

At one point, India looked set for a score of 300 but slowdown caused by Ismail & Co. in the last ten overs meant India’s bowling attack, minus Jhulan Goswami, out due to a side strain, now needs to defend 274 to enter the semi-finals of the mega event.

Boundaries continue to come for Verma as Ayabonga Khaka was dispatched for boundaries through extra cover and mid-off. Verma’s aggression was the main reason behind India amassing 68 runs off power-play, their highest score in this phase of the tournament. The ten-over phase had ten boundaries, seven of which were hit by Verma while Mandhana slammed three.

Post-power-play, Verma and Mandhana kept the scoreboard ticking till the former reached her maiden World Cup fifty in just 40 balls with a four thumped over mid-on off Masabata Klass.

But in the next over, South Africa broke the 91-run opening partnership as a huge miscommunication on the field resulted in Verma sacrificing her wicket. With Yastika Bhatia clean bowled by Chole Tryon for just two, South Africa were trying to make a comeback in the match.

Mandhana, sedate till then, brought out her aerial shots while Raj took her time to settle down. With Raj creaming drives with ease, Mandhana reached her fifty in 69 balls but was out for 71 as Chloe Tryon dived full length to her right for a stunning catch at mid-off, bringing the 80-run partnership for the third wicket to an end.

Raj continued to make the most out of gifts sent by South African bowlers while maintaining her strike rate in the vicinity of 70 and above. A full toss was swept away to the fine leg while anything short and overpitched wide was caressed through the off-side. But in an attempt to go big, Raj holed out to mid-off, giving Klass her second wicket of the match.

Harmanpreet Kaur looked scratchy in her knock of 48 but got two crucial boundaries off Kapp in the 48th over as South Africa dragged some momentum in their favour. The Proteas made good use of bowling changes, short-pitched deliveries and variations in pace to concede just 51 runs in the last ten overs, bagging four scalps.