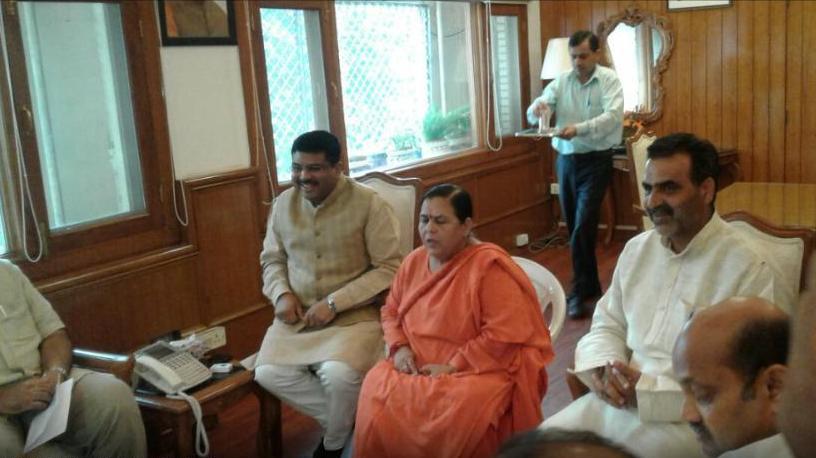 “We are committed to the fact that we won’t allow causing injustice to Odisha at any cost in the matter of Mahanadi water sharing,” reiterated Union Water Resources Minister Uma Bharti here today.

“I have decided to invite Chief Ministers of Odisha and Chhattisgarh to Delhi for a meeting on any date between September 10 and 20 whichever is convenient to them to resolve the matter since we are committed that no injustice is done to Odisha,” Bharti said after a meeting with a delegation of BJP leaders from Odisha led by Union Petroleum and Natural Gas Minister Dharmendra Pradhan which met her over the Mahanadi issue.

The Union Water Resources Minister informed that she has asked her department’s officials to ensure Chhattisgarh shared all information sought by Odisha before the meeting of the two Chief Ministers at Delhi.

Odisha: BJD to launch ‘Mahanadi Surakshya Abhiyan’ on May 16

“I have asked my department’s officials to ensure that Chhattisgarh provides Odisha with all information that the latter had sought before the meeting of the two Chief Ministers at Delhi. My officials have told me that it will be completed within a week,” Bharti informed.

The Union Water Resources Minister scotched rumours that the Central Water Commission (CWC) was working on some plan of Chhattisgarh to draw more water from Mahanadi.

“I would like to clarify that Chhattisgarh has made no such request to the CWC,” Bharti clarified appealing to the media to clear the air of rumours.

Union Petroleum and Natural Gas Minister Dharmendra Pradhan who had led the BJP delegation to the Union Water Resources Minister said: “Bharatiya Janata Party, Odisha unit had come here to express our concern on Mahanadi since Chhattisgarh has unilaterally constructed barrage at Arpa. For that reason apprehension in Odisha is natural.”

“Though water being a state subject, uninterrupted flow in Mahanadi during the non-monsoon period in Odisha is the state’s interest and has been clarified by Bharati and Balyan during debates in the Lok Sabha and Rajya Sabha on the issue. We had come here to urge the Ministers that Odisha being in the downstream of Mahanadi its stakes and concerns were more and there should not be any compromise on Odisha’s interests,” Pradhan told reporters after the meeting.