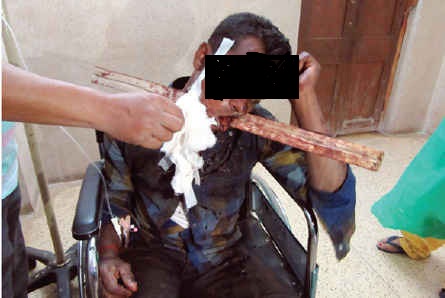 In a tragic incident, a wooden plank pierced into a youth’s face after he fell from an under-construction culvert in Odisha’s Kandhamal district last night.

The youth fell into a 15-feet below the road near the culvert as there was no signage put up for diversion of vehicles for the ongoing construction work. The unfortunate incident took place while he was on his way back home from Tumudibandha block office after submitting polling agent approval paper for a Sarpanch candidate in the district.

The youth, identified as Bhabita Patra (25), was rushed to Baliguda Sub-Divisional Hospital in the district and later shifted to MKCG Medical College and Hospital in Berhampur in a critical condition.

On duty doctors took him under knife and removed the foreign object from his body. His condition is stated to be stable.

According to reports, the Sarpacnch candidate of Jhiripani panchayat Arjuna Patra along with his two agents Bhabita and Pabitra Nayak of Jhiripani village had gone to the block office to submit polling agent approval paper.

Bhabita and Pabitra were returning back home on a bike in the evening around 7 pm.

Unfortunately, they met with an accident near an under construction culvert, unaware of the construction work on the road.

They fell down into a 15 feet pit with the bike where a piece of wood penetrated Bhabita’s face while Pabitra suffered minor injuries.