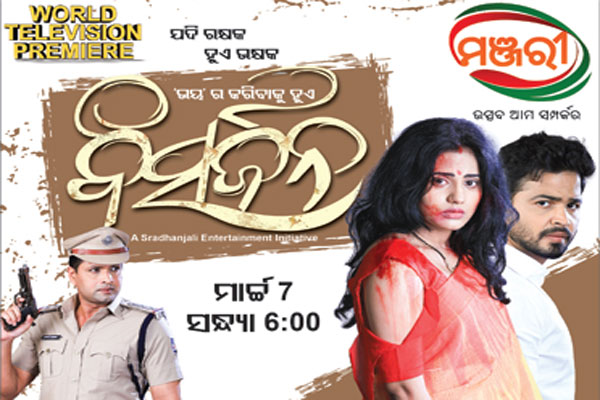 Bhubaneswar: On the eve of International Women’s Day, Odia film ‘Bisarjan’ produced exclusively for telecast on Manjari TV, will have a world television premiere on March 7, from 7 pm.

Bisarjan is a Ram Krishna Padhi directorial that will be released under the Shraddhanjali Entertainment banner.  Actors Shraddha Panigrahi, Shubhashis Sharma, Lawrence Aniket, Jyoti, Sudam, Manas, Bubu, Shritul and Simon will be seen in different roles in the film.

Worth mentioning here, Shraddha has not only played a pivotal role in the film, she has also written the story. To add to that, Bisarjan will mark Shraddha’s debut as a producer in the Odia entertainment industry.

Mega serial ‘Bahu Aamara N.R.I’ to telecast on Manjari from…

Music composition of Bisarjan is done by Asad Nizam. While Tapu Nayak has penned the lyrics,  Asima Panda, Kuljit Patnayak and Kumar have sung the songs whose screenplay has been designed by Chinmaya Das Patnayak.

Giving a sneak-peek into the plots, the story begins with two orphans Shubahshis and Nandini getting married and leading a happy life together in a new city. Everything was perfect until their neighbour Ranjit, a cop by profession, laid eyes on Nandini. That opened the gates of torment, harassment and misery for her.  But, how could an ordinary girl ensure justice against a predator in a society that blames only the victim!

To know how she deals with her adversities, watch Bisarjan this Sunday.