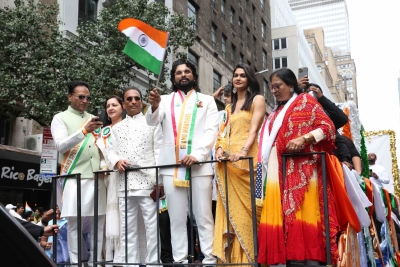 Telugu megastar Allu Arjun was the grand marshal at the parade on Sunday, which saw an estimated turnout of 150,000 people, both as marchers and as the audience along the route on Madison Avenue.

The Federation of Indian Associations (FIA) tri-state area unit, which organised the celebration, claimed that two events at the parade entered the Guinness Book of World Records: The most number of flags flown simultaneously, and the largest ensemble of the damru, the twin-headed drum.

FIA Chairman Ankur Vaidya said that these records are dedicated to the global Indian community.

The flags display, in keeping with the theme this year of honouring the Tiranga, the Indian flag, made a show of India’s universality by also including the flags of nations around the world.

New York’s Mayor Eric Adams, holding aloft an Indian flag, was among those leading the parade.

Over forty floats from Indian organisations as well as American businesses like Dunkin Donuts and entertainment companies like ESPN and Hulu.

A plane towing an Indian flag flew low over the city during and after the parade.