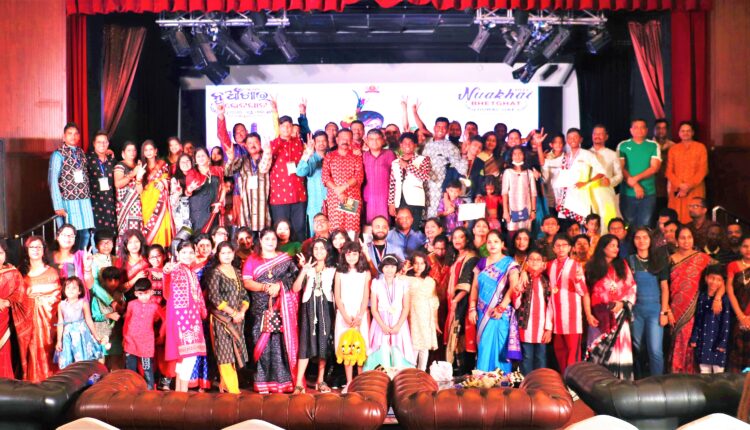 Dubai: A Nuakhai Bhetghat was organized yesterday by the Nuakhai Paribar of United Arab Emirates (UAE) at the Indian Consulate, Dubai, UAE. This is the largest in-person get together on the occasion of Nuakhai, anywhere outside India.

An extravagant display of Sambalpuri culture by showcasing Western Odisha’s language, music & dance and handlooms mersmerized the audience. The auditorium in the Indian Consulate was converted into a mini Odisha with foot tapping Sambalpuri music and dance enthralling all the attendees. The hall was jampacked with a capacity crowd, all dressed in Sambalpuri costumes. This crowed participated in this event with great enthusiasm. 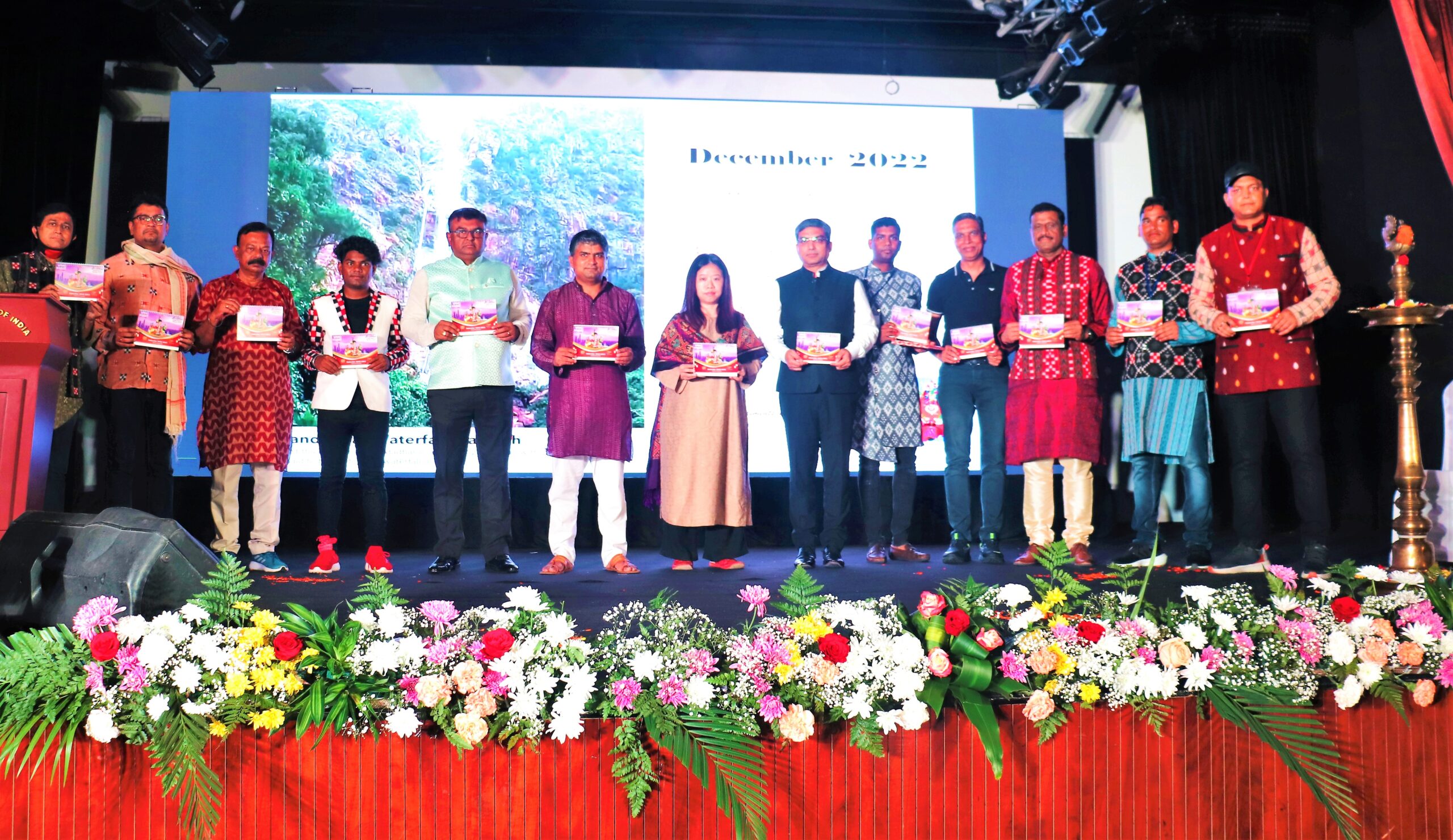 The event started with a special aarti and puja. The new grain (Nuachara) was first offered to Maa Samaleswari. One of the highlights of the event was the communal partaking of the ‘nua chara’ (new rice). This new rice was specially flown in from Village Pada, Bijepur (Bargarh district). After that people greeted each other with the traditional greeting –  ‘Nukhai Juhar’.

Talented local residents comprising of men, women and children then performed on the auditorium stage. Sambalpuri songs, dances and even a fashion show was showcased. A special contingent had come in from the Emirate of Abu Dhabi for performing at the event. 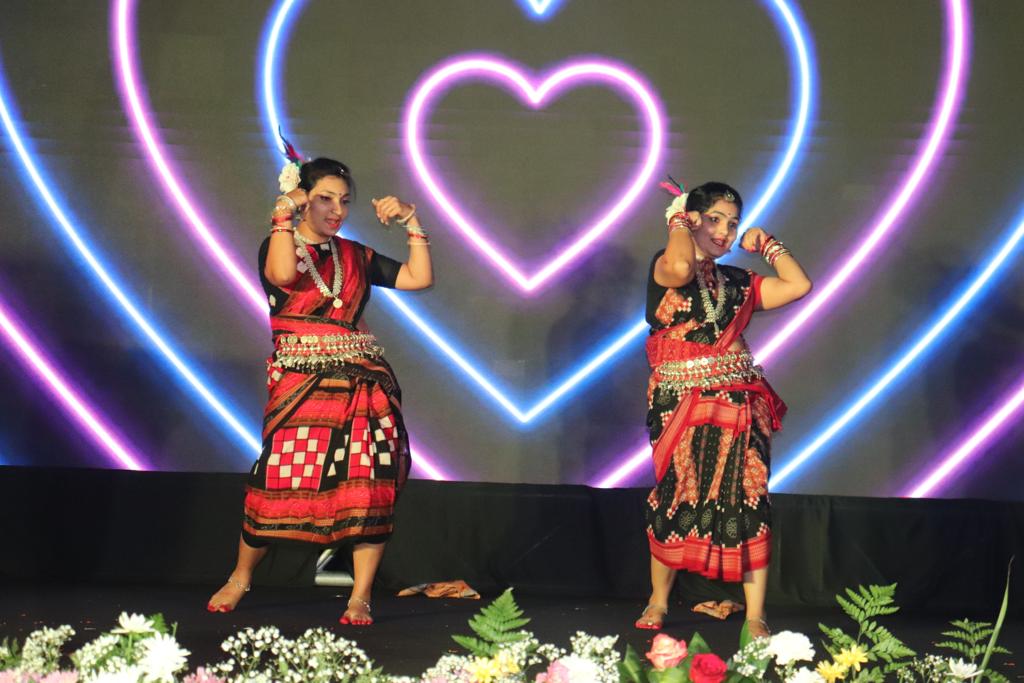 People from all over the world witnessed the event  through live streaming on Facebook and YouTube. One of the highlights of the function was the serving of traditional foods. Home cooked ‘ambil’ was a hit among all the attendees. A Sambalpuri desktop calendar was also released on the occasion of Nuakhai Bhetghat. This calendar has the pictures of many tourist spots in Western Odisha.

Indian Foreign Service (IFS) Officer, Ms. Tadu Mamu, Consul (Press, Information, Culture & Labour) was the Chief Guest at the function. In her address, Ms. Tadu Mamu said that she was attending a Nuakhai Bhetghat for the first time. She admired the beautiful culture of Western Odisha and commended the organizers for spreading it in Dubai, continuosly since 2014 (when the first Bhetghat was organized). She said that she was happy that Nuakhai Bhetghat has become an annual feature in the UAE. 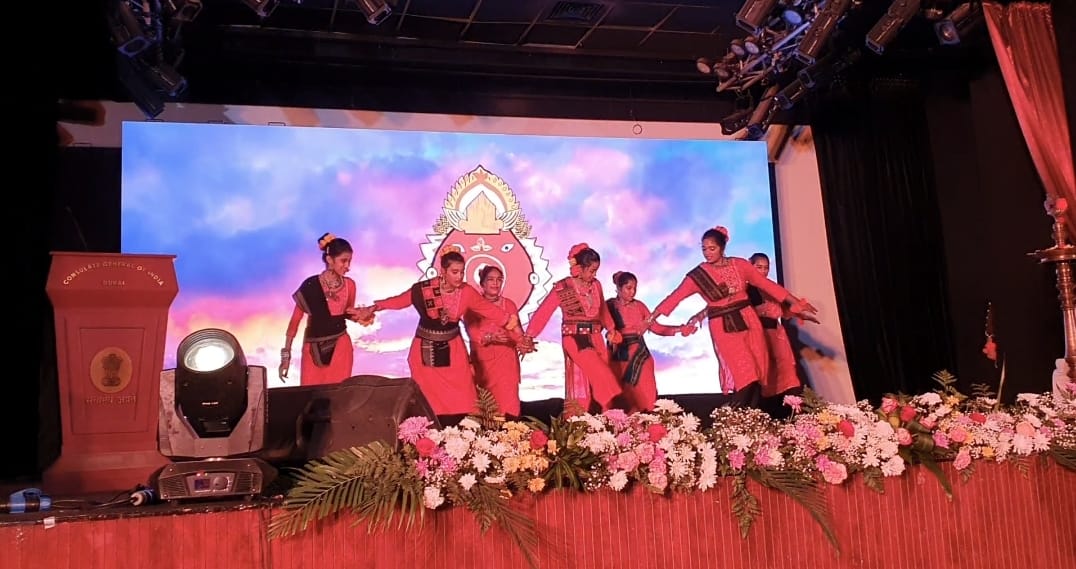 Durga Panda said that he was delighted to be invitied to Dubai as a guest for Nuakhai Bhetghat. This was his maiden foreign trip. He was overwhelmed by emtotion, when invited on the stage. His recited some of his poems which touched everyone’s heart. He was stunned to see Sambalpuri cutlture being displayed on foreign soil in such a grand manner.

Jogesh Jojo was also thrilled to be in a global city like Dubai. He had the crowd in splits with his comedy which was delivered in his inimitable sytle. Later on he made everyone dance to his songs. His energy and infectious enthusiasm rubbed off on all and most of the audience were on their feet.

As per the organizers, organizing such Nuakhai Bhetghats on foreign soil have served the dual purposes of promotion of  the unique culture of Western Odisha across the globe, as well as uniting the community through the spirit of brotherhood and amity. Overjoyed by the response to this year’s Nuakhai Bhetghat (attended by a capacity crowd), the organizers said that they will continue to invite talented and deserving artistes from Odisha to perform in UAE and showcase their talent on the world stage.

Gadkari invites US investors for roads and highways projects in India