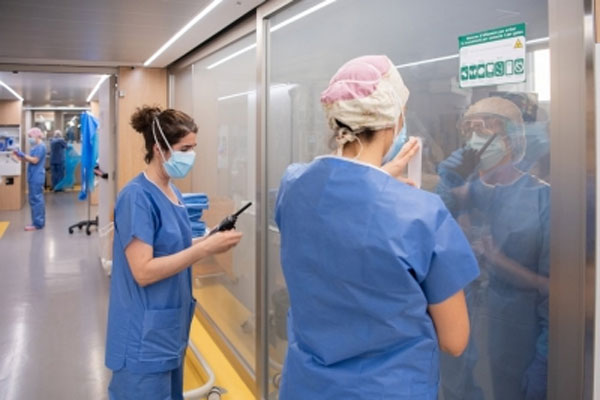 Previously the longest known PCR confirmed case is thought to be 335 days.

Researchers at the King’s College London and Guy’s and St Thomas’ NHS Foundation Trust studied nine immunocompromised patients, between March 2020 and December 2021, who tested positive for the virus for at least eight weeks.

Infections persisted for 73 days, on average, but two patients had persistent infections for more than a year.

The patients had weakened immune systems due to organ transplantation, HIV, cancer, or medical therapies for other illnesses.

Regular sampling and genetic analysis of the virus showed that five of the nine patients developed at least one mutation seen in variants of concern.

Some individuals developed multiple mutations associated with variants of concern, such as the Alpha, Delta and Omicron variants.

The virus from one individual contained 10 mutations that would arise separately in variants of concern, such as the Alpha, Gamma and Omicron variants.

Five of the nine patients survived. Two of those five cleared SARS-CoV-2 infection without treatment, two cleared the infection after treatment with antibody therapies and antivirals, and one individual has ongoing infection.

At their last follow-up in early 2022, the patient with ongoing infection had been infected for more than one year (412 days).

At their last follow-up in early 2022, the patient with ongoing infection had been infected for more than one year (412 days).

The person has been treated with monoclonal antibodies to try to clear their infection. If this person remains positive at their next follow-up appointment, they will likely pass the previous longest known infection of 505 days described in this report.

“Immunocompromised patients with persistent infection have poor outcomes, and new treatment strategies are urgently needed to clear their infection. This may also prevent the emergence of variants,” said Gaia Nebbia from the Trust.

The researchers also report one of the first cases of an occult Covid-19 infection, who is thought to have cleared the virus, with negative tests, but is later found to have an ongoing infection.

“This has been described with other viruses such as those that cause Ebola or hepatitis B and is different to long Covid where the virus is generally thought to be cleared from the body but symptoms persist,” the team explained.

The team will describe the cases at the European Congress of Clinical Microbiology and Infectious Diseases (ECCMID) to be held in Lisbon, Portugal, from April 23-26.