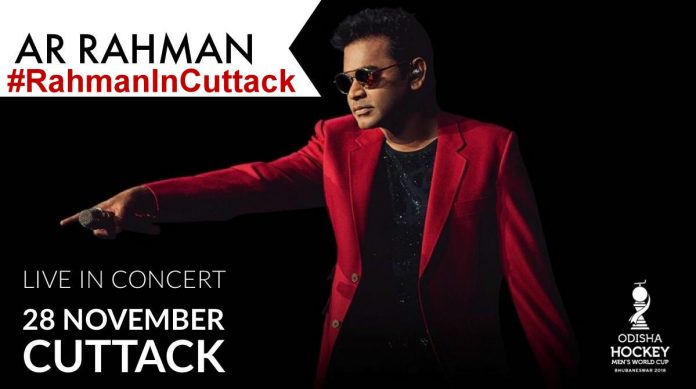 The legendary musician will perform in Cuttack on November 28, a day after the inaugural ceremony of the mega sporting event at Kalinga Stadium in Bhubaneswar.

Rahman himself announced this on his official Twitter handle this evening.

Delighted to announce that I shall be performing at the Millennium City, Cuttack, on 28th November as part of the Hockey World Cup celebrations #HWC2018 @Naveen_Odisha @TheHockeyIndia

Shah Rukh Khan, Akshay Kumar among stars to perform at…

The venue for Rahman’s live performance is yet to be finalized. Sources say it could be at Barabati Stadium or Jawaharlal Nehru Indoor Stadium in the city.

The ‘Jai Ho’ fame singer had earlier confirmed that he will be performing live at the opening ceremony of the World Cup at Kalinga Stadium alongside Bollywood superstar Shah Rukh Khan, among others.

Worth mentioning here that the acclaimed musician has composed the official world cup song titled ‘Jai Hind Hind, Jai India’, lyrics of which has been penned by the celebrated lyricist-poet Gulzar.

The Odisha Hockey Men’s World Cup Bhubaneswar 2018 will be the biggest tournament in Men’s Hockey in both form and spirit. Sixteen teams will take part in the tournament from November 28 to December 16.