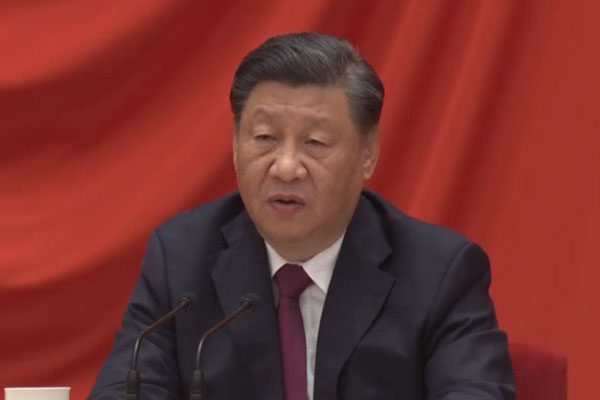 Beijing: Chinese President Xi Jinping has made his first public appearance since returning from a trip to Uzbekistan where he attended the 22nd SCO Summit, quashing unfounded rumours of a “coup” that sparked a frenzy of speculation ahead of a key Communist Party meeting.

Xi on Tuesday visited an exhibition in Beijing showcasing China’s achievements over his decade in power, CNN reported citing the state broadcaster CCTV.

On the network’s flagship evening newscast, the President was seen wearing a face mask and viewing displays at the Beijing Exhibition Hall, where photos of himself featured heavily.

He was accompanied by Premier Li Keqiang and other top leaders, including all members of the party’s supreme Politburo Standing Committee, CNN reported.

Xi had not been seen in public since returning to Beijing from the summit on September 16.

The visit was his first foreign trip in nearly 1,000 days since the beginning of the Covid-19 pandemic.

His absence gave rise to a swirl of online rumours, which claimed, without evidence, that he had been overthrown in a military coup and placed under house arrest, CNN reported.

The unsubstantiated rumours were further fueled by claims of mass flight cancellations, a common occurrence under China’s zero-Covid restrictions, and unverified videos of military vehicles on the road.

The wild speculation, which originated from Chinese dissident networks before being picked up and amplified by Indian media, was so intense that the hashtag “chinacoup” was trending on Twitter over the weekend.

That the rumour was able to spread so quickly is in no small part due to the highly opaque nature of the Chinese political system, in which important decisions are mostly made behind closed doors.

The absence of information means that even veteran observers of elite Chinese politics maintain a “never say never” approach, noting that while an occurrence such as a coup remains highly improbable, it’s impossible to know for sure what is really going on.

On this occasion, most were quick to point to the total lack of credible evidence supporting the supposed ‘coup’, CNN reported.

Instead, they noted that Xi was likely following his own quarantine rules and remaining in self-isolation after returning from abroad.

Even as the rest of the world has learned to live with the virus, China is sticking to a stringent zero-Covid policy favoured by Xi.

The Chinese border is still largely closed, with all international arrivals required to undergo seven days of hotel quarantine, followed by three days of home isolation.