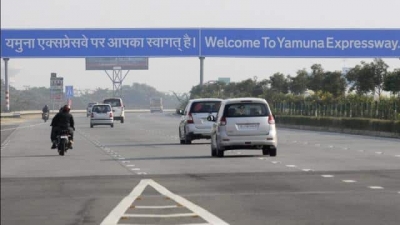 New Delhi: In 2003, the BSP-led government in Uttar Pradesh decided to build the 165 km long Taj Expressway (Yamuna Expressway) from Noida to Agra. On February 7, 2003, then Chief Minister Mayawati laid the foundation stone of the expressway from Lucknow. Jaiprakash Associates Limited (Jaypee Group) was given the responsibility of building the expressway.

Jaypee owned several cement factories at that time which were extensively used for the expressway. It was given the right to collect toll tax for 38 years and five hectare of land at five places along the expressway between Noida and Agra.

The agreement mentioned handing over Noida and Greater Noida expressway to the builder group.

After an abrupt halt due to change of governments, the construction work started when the BSP came to power again in 2007. Its name was then changed to Yamuna Expressway and was supposed to be completed by 2011. However, it became operational after being inaugurated by the SP-led government in 2012.

The journey from Noida to Agra can be completed in a short time through the expressway that is why more and more traffic has been diverted here instead of the old Mathura Road since the past several years. The number of accidents has also increased with the amount of traffic.

IIT Delhi did a survey of the expressway and presented its shortcomings in front of the Yamuna Expressway Industrial Development Authority (YEIDA), which then started rectifying the same. The number of accidents gradually decreased after this rectification.

What were the flaws pointed out by IIT Delhi?

The institute pointed out seven major flaws to be rectified at the earliest to reduce accidents:

* A rumble strip should be installed near the entry and exit points to ensure that the speed of vehicles is reduced there.

* Crush attenuators should be installed at the exit to reduce the damage to vehicles in case of accidents.

* The number of sign boards should be increased, in which stop, toll plaza, public facilities, distance etc. should be mentioned.

* The height of the barrier on the sides should be raised to prevent animals from entering.

* The lane on the expressway should be closed.

* The challan system should be improved further to control the speed of the vehicles.

* Flush medians should be developed instead of dividers.

What do road safety experts say?

Traffic and transportation expert, Abhinav Singh Chauhan told IANS that cement roads are low maintenance and have more durability. However, the pavement of cemented roads reflect heat instead of absorbing it, which heats up tyres of vehicles moving over it.

He said that it is crucial that the drivers are alert on the roads, which is why sign boards must be installed.

Rest rooms and tea points must be present at short distances so that the people driving remain fresh and active.

Chauhan added that companies make various types of tyres and their flexibility is directly proportional to how luxurious the vehicle is.

He advised that one should not travel in a vehicle whose tyres are in a bad condition on cemented roads as it can be dangerous.

What does the data say?

YEIDA CEO Arun Vir Singh released data pertaining to accidents, deaths and injuries from October 2016 to October 2022, according to which there has been a huge decline in accidents on the Expressway with the lowest number to be registered in 2022.

Singh said that the reason behind the reduced accidents is the ‘Thrie’ beams that have been installed on the entire expressway on both sides. Along with this, 172 ‘Bullnose’ barriers have also been installed.