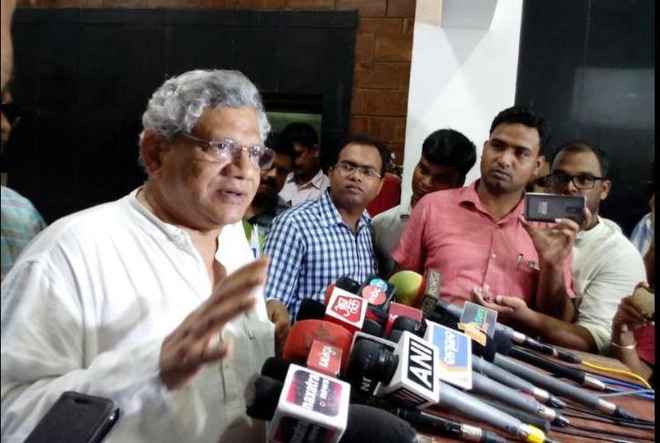 Bhubaneswar: CPI(M) general secretary Sitaram Yechury on Thursday termed the National Population Register exercise as a precursor of the National Register of Citizens and urged Chief Minister Naveen Patnaik not to allow it in Odisha.

As governments of 13 states including Odisha have already announced not to allow NRC and six chief ministers opposed the NPR, it can be said that half of India is against the two, he said.

“So, the NPR and the NRC cannot be completed (across the country) because of their adverse impact on the nation’s unity,” Yechury at a CPI(M) rally here.

Yechury said he wanted to meet Patnaik but could not due to the chief minister’s prior engagements. “However, I spoke to him over the phone and apprised him that NPR, 2020 is not the same as it has been earlier. Now, the Centre has added some questions in the NPR format to get the information required for the NRC,”  he said.

Prime Minister Narendra Modi may have said that no discussion was held on implementing the NRC, but the central government told the Parliament nine times that it would be taken up across the country, Yechury asserted.

“I appealed to Naveen Patnaik not to allow NPR in Odisha as this is the initial exercise for the NRC,” he said.

People who will not be able to provide all information during the NPR exercise may be tagged as doubtful citizens and their names will not appear in the NRC list, Yechury claimed.

Tribals, Dalits, poor and destitute people and widows may not be able to arrange the requisite documents to satisfy the official requirement, the CPI(M) leader said.

He claimed that there would be no separate survey for the NRC as the Centre plans to collect the required information during the NPR exercise.

“Everybody should understand that the NRC will cause more harm than good. Because of the Centre’s design, the NPR exercise will also suffer,” he said  demanding withdrawal of the CAA and halting of the NPR and NRC processes.

He said the CPI(M) activists will undertake door-to-door campaign across the country in February and March to make people aware of the adverse impact of the CAA, NRC and NPR.

Steve Jobs to be conferred with posthumous Presidential…