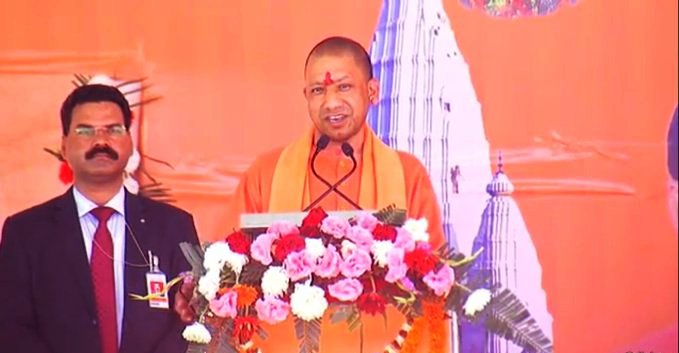 Bhawanipatna: Uttar Pradesh Chief Minister and BJP leader Yogi Adityanath today came down heavily on the Odisha Government alleging that it lacks pace in development and promised of fast progress in the state if the saffron party is voted to power in the upcoming Assembly polls.

Addressing a meeting of the party workers at the Lal Bahadur Shastri Stadium here, Yogi said that the Naveen Patnaik-led Odisha Government has constructed only 17 lakh pucca houses for people in the last 19 years while the BJP Government in Uttar Pradesh provided 20 lakh houses to poor people in two years.

“If the BJP is given a chance to form government in Odisha, the state will witness quick development like Uttar Pradesh,” said Yogi.

He criticised the State Government for taking credit in providing rice at Rs one per kg and said the BJP-led Central Government is contributing Rs 29 for one kg of subsidised rice while the Odisha Government’s contribution is mere Rs one.

While praising the Pradhan Mantri Kisan Samman Nidhi (PM-Kisan) scheme, Yogi said the KALIA yojana of the Odisha Government has no stability and is already into corruption from beginning.

Giving mantra to the BJP workers at the meeting, Yogi said Odisha will have a major role in making Narendra Modi the prime minister once again in 2019. He advised the party workers to pay attention in strengthening the booth committees in order to emerge victorious in the upcoming polls.

Yogi congratulated the workers for BJP’s performance in the last panchayat elections in the state and asked them to repeat the feat in the General and Assembly polls.

Later in the day, he addressed a meeting of the party workers at Nachuni in Khordha where he said that the State Government has no respect towards the freedom fighters and Paikas as it is not providing land for a Paika Rebellion Memorial at Barunei proposed by the Central Government.

He also alleged that Chief Minister Naveen Patnaik is not concerned about poor people and their health as the Odisha Government has not implemented Centre’s Ayushman Bharat scheme in the state.