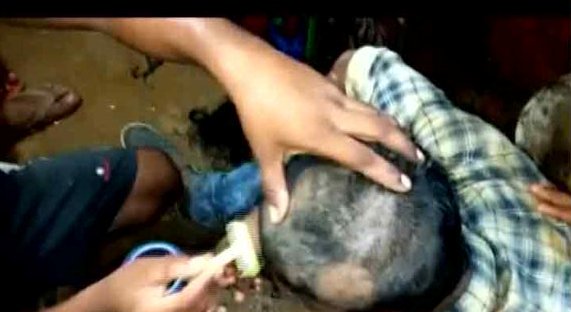 Mayurbhanj: In yet another incident of kangaroo courts taking the law into their hands, a group of villagers in Odisha’s Mayurbhanj district forcibly chopping off the hair of a lovebird. The matter came to light after a video of the bizarre incident had gone viral on social media. Two days back, a woman was dragged out of her home and thrashed by a group of people in a village in Nayagarh district for denying to accept a theft charge.

The incident took place at Mandua village on Saturday (June 22) under Karanjia police limits in the district.

A case was registered and investigation is underway after the girl lodged a complaint with Karanjia police yesterday.

Odisha couple ostracized from village over…

Odisha: Two youth thrashed, forced to kneel down for…

As per the available information, the girl’s alleged boyfriend came to Mandua village on Saturday evening to meet her. Upon knowing the boy belongs to another community and their alleged relationship, some people in the village took law to their hands and forcefully shaved the duo’s heads.

In the video, which has gone viral on social media, a group of people are seen holding the duo tightly and one person is chopping off their heads.

“On the basis of the victim’s complaint, a case has been registered against 22 persons and we have launched a manhunt to nab the culprits,” said Karanjia SDPO Narayan Nayak.

As per the latest reports, three persons were arrested so far and, according to the police, more arrests will be made soon.