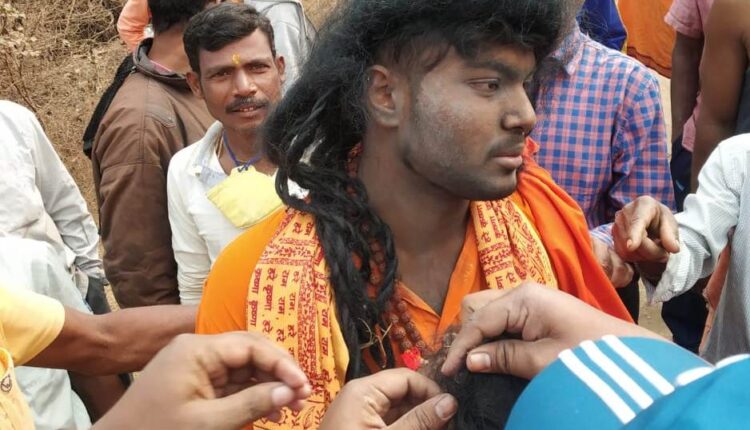 Jajpur: Disguising as a ‘sadhu’ (monk) and visiting the girlfriend’s place in Jajpur Road area proved costly to a youth. Locals in the Ferrochrome Gate Colony under Jajpur Road police limits caught hold of the ‘sadhu’ after suspecting his movement today morning. They informed the police presuming the youth to be a child lifter.

A local said he initially spotted the youth disguised as a ‘sadhu’. “When I saw the sadhu’s face, I found him to be quite younger. My suspicion grew over his unusual long beard. I slightly pulled the beard which came out easily. His large knot of hair was also found to be fake,” the local added.

On being informed the local police reached the spot and detained the youth. A police official said the youth is a Plus II student and resident of Angul.

The youth, Ayaskanta Behera is also a student of a Bhubaneswar-based private residential college. He was in a love affair with a girl from the same college, who is a native of Jajpur Road, the police official added.

After Ayaskanta came to know the girl would be married off to another youth, he decided to influence her mother after disguising as a ‘sadhu’. The girl reportedly told Ayaskanta her mother was a strong believer of ‘sadhus’ and ‘sanyasis’.

He reached the Jajpur Road by train this morning. Finding an isolated place, the youth changed his dress and wore a sadhu get-up. He then managed to reach the girl’s house and told her mother to break the marriage proposal.

Meanwhile, movement of Ayaskanta raised suspicion among locals while returning from the girl’s place. Some locals suspected the youth to be a child lifter and intercepted him. One of them pulled his beard and large hair knot which fell down easily. Locals then beat the youth and handed him over to the Jajpur Road police.

As per latest reports, the youth has been detained and investigation into the matter is on.

Nationwide crackdown against PFI: Over 30 held in Delhi;…