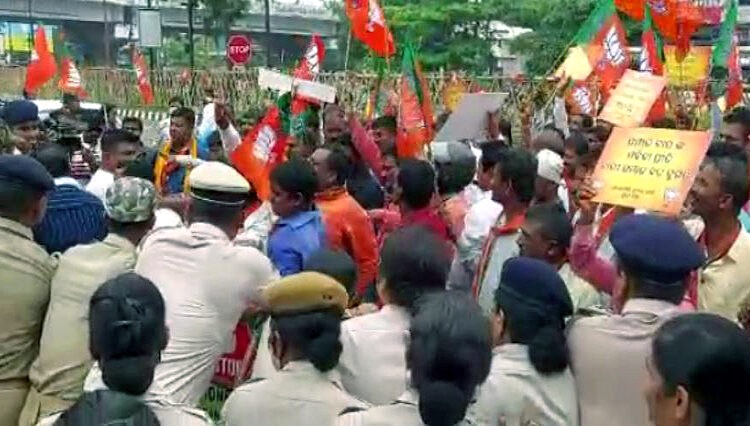 Hundreds of BJP workers staged protest in front of the DCP Office and shouted slogans.

The ZP member had earlier committed suicide on September 24. BJP alleged that state School and Mass Education (S&ME) Minister Samir Ranjan Dash is involved in the death by ‘suicide’. The viral audio is said to be a telephonic conversation between Sahoo and a local journalist named Akshay Nayak.

“Dharmendra Sahoo had said prior to his death to journalist Akshay Nayak that five persons are to be held responsible, in case the ZP member Sahoo commits suicide. The deceased had clearly mentioned the names of S&ME Minister Dash and his (the former’s) wife, including three others. BJP had previously placed the viral audio before mediapersons in a press conference held on September 27. The Minister Dash should be brought within the purview of investigation,” a senior BJP leader expressed.

However, probe team has seemingly not taken any step in this regard, the party leader rued.

The viral audio clip is of 1 minute and 27 seconds in duration. It contains enough of evidence about the ‘suicide’ of Sahoo. If police will not take cognizance of the clip and bring Dash within the purview of probe soon, BJP will intensify its agitation in the days ahead, another leader Pravati Parida warned.