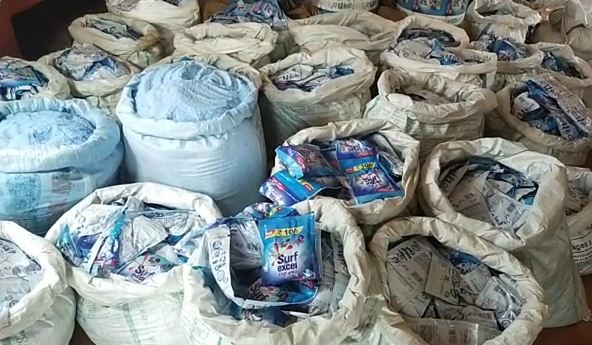 Cuttack: Seizure of adulterated products continues unabated in Odisha’s Cuttack as the Twin City Commissionerate Police seized around 3340 kg of duplicate Surf Excel detergent and detained a person in this connection.

Acting on an information that Surf Excel wrappers were being carried in an auto-rickshaw from Cuttack Railway Station, the Malgodown police on April 17 intercepted the vehicle in the area and seized 24 rolls of the wrappers.

The cops detained one Abhijit Behera of Jagatpur area who was involved in transportation of the wrappers. On being questioned by police, Abhijit revealed that he was operating a detergent manufacturing unit at Brahmanipada under Tangi police limits.

As police carried out a search at the unit, illegal manufacturing of detergent at the place came to fore. Further probe revealed that his two associates were involved in the offence.

Police raided the two places and seized equipment and huge cache of fake detergent, including 1540 kg of packed detergent and 1800 kg in loose form.

The Malgodown police registered a cheating case in this connection while efforts were on to trace and nab other two accused.

Series explosion near school in Kabul