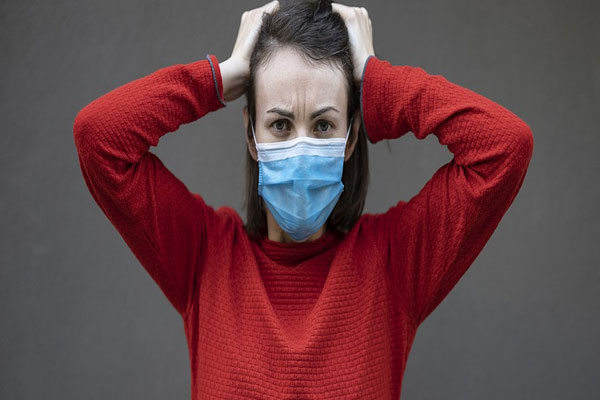 The coronavirus pandemic is the greatest global trauma since the Second World War and unprecedented in most of our lives. Calling the pandemic, the world’s worst public health crisis in 100 years, an Oxfam report in 2021 said it triggered an economic crisis comparable in scale only with the Great Depression of the 1930s.I

India is witnessing a resurgence of the second wave in a ghastly shape. Amid a mammoth wave of treacherous Covid-19 infections, people are overwhelmed with grief as well as rage at their family’s ordeal. It is a fury pervasive in urban India, as citizens struggle to obtain medical care for ailing loved ones. With hospitals scrabbling for beds and oxygen, many people have died in ambulances and car parks waiting for a bed or oxygen, while morgues and crematoriums struggle to deal with a seemingly unstoppable flow of bodies. The melancholic image of the flames rising from the mass funerals in India’s cremation grounds is found on the front page of national and international newspapers.

Citing an estimate by the Institute for Health Metrics and Evaluation – an independent global health research centre of the University of Washington, the Lancet’s editorial says COVID-19 deaths in India could potentially reach a “staggering” one million by August 1 this year. It warned that If that outcome were to happen, Modi’s government would be responsible for presiding over a self-inflicted national catastrophe. “Can India, population 1.3 billion, be isolated?” the Washington Post asked rhetorically in a recent editorial about India’s unfolding catastrophe and the difficulty of containing new, fast-spreading Covid variants within national borders.

An article in “Financial Times” says “India’s Covid-19 crisis diminished Narendra Modi. Many Indians feel abandoned by a leader who ignored signs of a second wave and appears indifferent to their plight. The Guardian said, “The system has collapsed: India’s descent into Covid hell”. While “The Times”, London, carried the headline “Modi flounders in India’s gigantic second wave,” it has blasted the government for “the air of complacency and denial that have dogged his government’s response to the crisis.”

Australia’s top newspaper, The Australian, in its article, titled: ‘Modi leads India into a viral apocalypse’ wrote, “Arrogance, hyper-nationalism and bureaucratic incompetence have combined to create a crisis of epic proportions in India, with its crowd-loving PM basking while citizens suffocate.” In an article on Times, journalist Rana Ayyub said that the second wave of the pandemic in India is like “nothing she has ever seen” and the responsibility for it lies primarily with a strongman regime that has ignored all caution. Writing for the Washington Post, professor Sumit Ganguly opined that the Modi government abandoned caution and, in a series of stunningly reckless decisions, invited the second wave that is now crushing the country.

The World Health Organization has linked the surge in coronavirus cases in India to religious and political gatherings in the country. The government underestimated the virus, reopening the economy too fast and too broadly. The surge in infections has coincided with a dramatic drop in vaccinations because of supply and delivery problems, despite India being a major vaccine producer.

In reality, neither people nor politicians learnt from the first wave of the pandemic. The Indian government had enough time to prepare for the second wave to at least lessen its catastrophic impact. India squandered its early successes in quelling Covid-19. India’s leaders let down their guard.

Until April, the government’s Covid-19 taskforce had not met in months. A forum of scientific advisers set up by the government warned Indian officials in early March 2021 about a new and more contagious variant of the coronavirus taking hold in the country. But despite the warning, the Modi government did not take strong steps to stop the spread of the virus. This is a crime against humankind, and civilisation.

The complacency, arrogance, greed for power and apathy for the poor hindered the ruling dispensation from foreseeing the danger ahead. The scenario appeared like Covid never hit India or will not hit again and the main issue before the ruling dispensation was to capture more power. When Coronavirus was spreading its venom, the Prime Minister and many central leaders were busy in election campaigning even encouraged dangerous behaviour.

The first wave of the pandemic has left a trail of devastation on the Indian economy and the second wave is going to exacerbate it further. The government estimates India’s gross domestic product shrank 8 per cent in the year in 2020-21, its biggest contraction since 1952, while China’s economy grew around 2.3 per cent. China’s GDP galloped to a record 18 per cent in the post-Covid comeback in January-March 2021 while India’s growth forecast is revised downward.

As many states resort to localised lockdowns to tame spike in Covid-19 cases, India’s GDP growth will be hit hard further, as the production chain is going to be disrupted again and this will dampen the fragile economic recovery and pull down overall economic growth for the current fiscal. Some economists and rating agencies have started trimming India’s expected economic growth in 2021-22. Some say the permanent GDP loss stemming from the brunt of the coronavirus is massive at 10 per cent.

In countries where poverty levels are already high, the immediate impact of even a small downturn in economic activity can be catastrophic. But recently, the US-based Pew Research Centre revealed the number of people who are poor in India (with incomes of $2 or less a day) is estimated to have increased by 7.5 crores.

It finds that the middle class in India is estimated to have shrunk by 3.2 crores in 2020 as a consequence of the pandemic induced downturn. Meanwhile, the second wave is set to crush some more. China fared much better, with the number of people in the middle-income tier decreasing by only 1 crore, while the poverty level remained virtually unchanged in 2020. As the Covid-19 recession has exacerbated inequality, the increase in the number of poor is likely greater than estimated in this analysis. The middle class may have shrunk by more than projected.

A study by Azim Premji University in Bangalore showed even more alarming numbers in its report titled ‘State of Working India 2021: One Year of Covid-19′. It showed that as the pandemic and eventual lockdowns wreaked havoc on the economy and livelihoods, around 23 crore Indians have been pushed into poverty during the past year, which is below the national daily minimum wage threshold of Rs 375. Over the entire eight-month period (March to October), an average household in the bottom 10 per cent lost Rs 15,700, or just over two months’ income.

The IMF says the surge in new Covid cases represents a ‘worrisome downside risk’ to India’s economy, and it’s the poorest who may be the worst hit. With the spread of the virus, economic activity is being adversely impacted—sending ripples across sectors as varied as auto, real estate, tourism and banking. Some of this is bound to spill over into the so-called informal sector as well, where the vast majority – 90.7 per cent of India’s workers operate, without written contracts, paid leave, health benefits or social security.

Further, the government tax collections will plummet with the debt burden getting escalated. It may be noted that India’s public debt as a percentage of GDP has increased from 72 per cent in 2019-20 to 89 per cent in 2020-21. This means the debt is not spurring growth. What will also make things difficult is the fact that inflation has been rising, eroding the purchasing power of people and India that witnessed recession is now facing stagflation. Household savings has got a beating too. In economics, stagflation or recession-inflation is a situation in which the inflation rate is high, the economic growth rate slows, and unemployment remains steadily high.

It presents a dilemma for economic policy, since actions intended to lower inflation may exacerbate unemployment. The term, a portmanteau of stagnation and inflation, is generally attributed to Iain Macleod, a British Conservative Party politician who became Chancellor of the Exchequer in 1970. Macleod used the word in a 1965 speech to Parliament during a period of simultaneously high inflation and unemployment in the United Kingdom.

As per the Centre for Monitoring Indian Economy (CMIE)’s latest data, the unemployment rate in India has been increasing again from March 2021. It shot up to 8.2 per cent (urban 10.5 per cent, rural 7.0 per cent) on 9 May 2021 from 6.5 per cent in March with lower absorption of labour in the market. According to the Centre for Monitoring Indian Economy (CMIE), while the labour force shrank by 11 lakhs, over 75 lakh jobs were lost in April 2021 as lockdowns bite to quell the second wave of COVID-19. But the 34 lakh who lost their salaried jobs are in a deeper crisis.

In the organised sector, companies will try and cut down expenditure, retrench employees, cut wages to maintain or enhance profits, thus affecting aggregate demand of the overall economy adversely. Rural demand, one of the pillars of the economy that’s been holding firm, may buckle under the weight of the unprecedented second Covid wave sweeping through the villages and small towns of India.

The banking crisis is going to be further aggravated. The policy was, indicating that lending by banks is slowing down intensely. The rating agency ICRA estimates that banks have accumulated bad loans worth Rs 1.3 lakh crore between September and December 2020. An economic downturn likely to have a significant increase in NPAs and credit losses could lead to a lower economic risk score.

An aura of uncertainty further looms large unless the monstrous pandemic is incarcerated. The RBI Current Situation Index has been negative in all surveys conducted in the past four years except the one in March 2019. On April 7, RBI released updates to its regular Consumer Confidence Survey. The households are found wary of discretionary spending. According to CMIE, there is heightened pessimism regarding the future, income over the next 12 months as well as the economy in the next year and over the next five years. The raging second wave of Covid-19 has resulted in a 3.8 per cent dip in the index of consumer sentiment in April, the sharpest fall since May 2020

The state has got a role and responsibility towards those who are languishing under poverty and starvation or any natural calamity or pandemic. A failed state like India is one where the government is not in control. In control of what? In control of the rule of law, the economy, security, stability and development. To recall Albert Einstein, “We cannot solve our problems with the same level of thinking that created them. The need of the hour is to enhance spending and spend massively in health infrastructure. The resources needed for this can be raised by taxing the rich, and corporates at higher rates and curbing tax evasion and recovering money locked in tax dispute.

Disaster and pandemic management to be taught in schools, colleges in Odisha