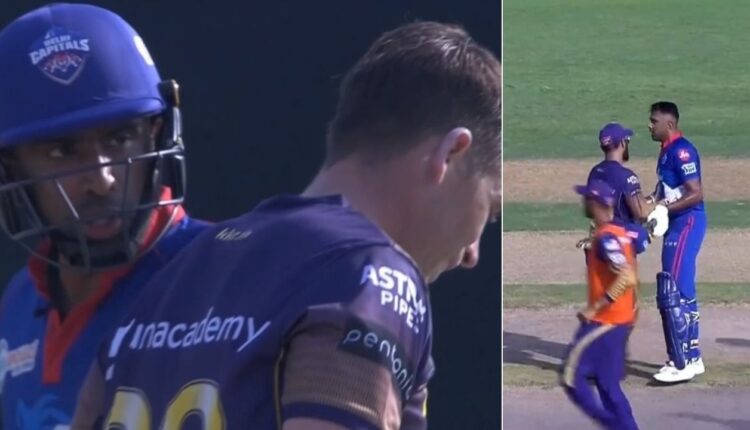 Sarjah/Bhubaneswar: Delhi Capitals spinner Ravichandran Ashwin took to social media on Thursday to issue his statement regarding the on-field incident with Kolkata Knight Riders skipper Eoin Morgan and pacer Tim Southee during their IPL 2021 game at the Sharjah Cricket Stadium on Tuesday.

KR seamer Tim Southee dismissed Ashwin on the first ball of the 20th over during the Capita’s’ innings; Ashwin was caught at the deep backward square and as he was walking by the pitch, the Kiwi pacer had some words to say to him.

The veteran spinner then stormed towards Southee for a discussion. He then had a go at the KKR skipper Eoin Morgan. Thankfully, KKR wicket-keeper Dinesh Karthik came in between and stopped Ashwin from having any more altercations and calmed him down.

“1. I turned to run the moment I saw the fielder throw and dint know the ball had hit Rishabh. 2. Will I run if I see it!? Of course I will and I am allowed to. 3. Am I a disgrace like Morgan said I was? Of course NOT,” Ashwin wrote on Twitter.

1. I turned to run the moment I saw the fielder throw and dint know the ball had hit Rishabh.
2. Will I run if I see it!?
Of course I will and I am allowed to.
3. Am I a disgrace like Morgan said I was?
Of course NOT.

“4. Did I fight? No, I stood up for myself and that’s what my teachers and parents taught me to do and pls teach your children to stand up for themselves. In Morgan or Southee’s world of cricket they can choose and stick to what they believe is right or wrong but do not have the right to take a moral high ground and use words that are derogatory. What’s even more surprising is the fact that people are discussing this and also trying to talk about who is the good and bad person here! To all the ‘Cricket is a gentleman’s game’ fans in the house’:

“There are millions of cricketers with several thought processes that play this great game to make it their careers, teach them that an extra run taken due to a poor throw aimed to get you out can make your career and an extra yard stolen by the non striker can break your career.

“Do not confuse them by telling them that you will be termed a good person if you refuse the run or warn the non striker, because all these people who are terming you good or bad have already made a living or they are doing what it takes to be successful elsewhere.

“Give your heart and soul on the field and play within the rules of the game and shake your hands once the game is over. The above is the only ‘spirit of the game’ I understand.”

Several sections of the media and former cricketers slammed Ashwin for his role in the incident. Australian pace legend Shane Warne even went a step further by singling him out and calling him a ‘disgrace’.