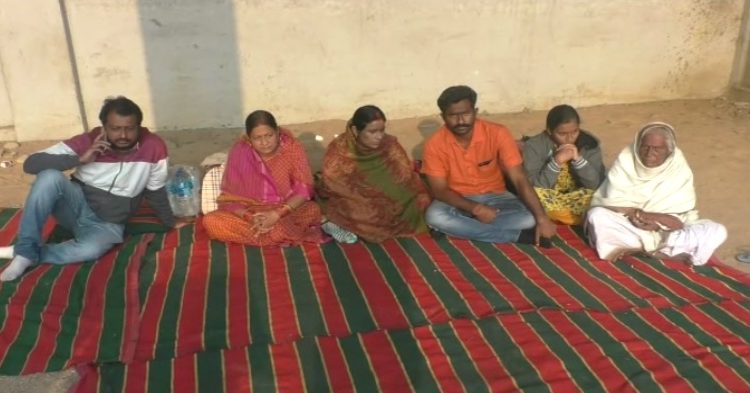 Jharsuguda: The family members of former Odisha MLA Anup Sai, who was arrested in connection with a double murder case, staged dharna in front of Collectorate in Jharsuguda district alleging harassment by Chhattisgarh police.

The family members are on dharna since last night demanding security for the family.

Protesting a notice from Raigarh police to Anup Sai’s son for appearance, the family sought protection from the district administration in the case.

“The Chhattisgarh police served me a notice asking for appearance before Raigarh police for probe into the double murder case under which my father has been booked, a day after I and my cousin visited the police station to meet my father. They asked me to appear before the police today when the vehicular traffic is completely disrupted due to Bharat Bandh. They are conspiring to drag me into the case to harass my family,” said Anup Sai’s son.

“The year when the murder took place, I was a student and pursing my third year at ITR. I was served notice for questioning suspecting my involvement in the murder case,” he said terming the allegation by Chhattisgarh police against his father as ‘conspiracy’.

“The police have threatened my father that they will not leave him till he admits to have committed the crime. They are harassing him mentally and pressursing him for confession,” he added.

Moreover, the family threatened to commit mass suicide fearing danger to their lives.

“Following arrest of my brother, the Raigarh police has been continuously threatening us if we leave the place. We will consume poison if they continue to harass us in the case,” said Sai’s elder brother Pramod Sai.

On the other hand, Chhattisgarh police appealed to the court seeking permission to conduct narco test on two accused persons Sai and his driver Vardhan Toppo to get more clues in the murder case.

Raigarh SP said that the police have some vital evidences against the accused persons. However, he alleged Sai of not cooperating with police in the investigation.

Yesterday, the Chhattisgarh police had served notice to the deceased’s relatives for questioning in connection with the double murder case. The investigators have summoned Kalpana’s brother Varun Das and sister-in-law. Varun is a resident of Brajarajnagar.

Worth mentioning, Sai was arrested by Chakradhar Nagar police for his alleged involvement in murder of Kalpana Das and her minor daughter Babli in 2016. The duo was killed and then run over by four-wheelers to disfigure the bodies so that it would be difficult for the police to ascertain the identify of the deceased.