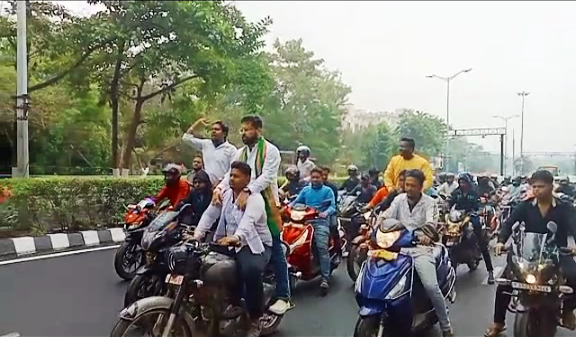 Bhubaneswar: Intensifying the protest against the Centre over rise in prices of fuel and other essential commodities, members of ruling Biju Janata Dal (BJD) today took out a mass motorcycle rally  in the state capital disrupting vehicular movement.

The agitators also slammed the Centre for rise in unemployment.

Holding banners and party flags and shouting anti-Government slogans, hundreds of BJD workers took out the motorcycle rally from the party office to Power House Chhak here and staged a dharna there.

BJD MLA from Atabira and former Minister Snehangini Chhuria said the Centre has betrayed the people by making false promises. People are facing several difficulties due to rise in prices of fuel and other essential commodities amidst the COVID-19 pandemic. And. rise in unemployment has just added to their woes. The Centre should take immediate steps to bring prices the essential commodities under control.

The party members also threatened that  they will intensify the protests in coming days, if the demand is not met at the earliest.