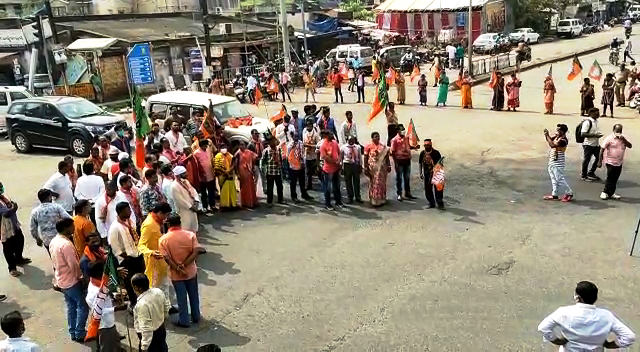 Holding party flags and shouting anti-Government slogans, the agitators blocked the main road for hours. They alleged that the cops have failed to even trace the motorcycle used by the miscreants in the bomb attack even after two days of the incident, let alone arrests being made. Condemning the incident, the saffron party leaders cautioned that hooliganism will no more be tolerated in the district and demanded immediate arrest of those involved in the bomb attack.

Meanwhile, police forces were deployed in the area to avoid any unpleasant situation during the protest.

BJP district president Sabuja Mahanta said, “We had staged a road blockade for around seven hours as a mark of protest after bombs were hurled at MLA Mohan Majhi’s vehicle on October 10. We called off the strike after the district SP assured us to arrest those involved in the incident within 24 hours. As no action was taken by the cops even after 36 hours of their assurance, we decided to hit the streets again.”

The party further warned that it would further intensify the protest in coming days, if the accused are not arrested at the earliest.

On October 10, two miscreants came on a motorcycle and hurled bombs at Majhi’s vehicle near Mandua under Keonjhar Town police limits. Though no injury was reported, the vehicle partially damaged in the bomb attack, which was made when the Keonjhar Sadar MLA was returning from a labour union meeting in the afternoon.