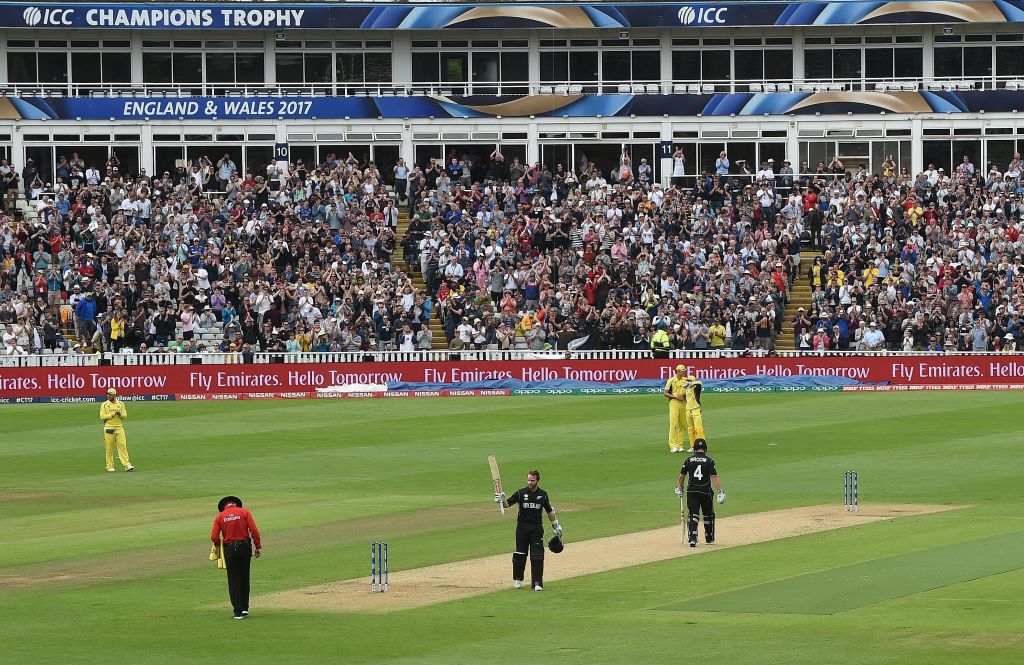 Rain played spoilsport in what was shaping up be an enthralling encounter, forcing the Group A Champions Trophy match between Australia and New Zealand to be abandoned here on Friday.

The match was repeatedly interrupted by rain, forcing the officials to reduce the number of overs on more than one occasion.

Electing to bat first, New Zealand had put up a healthy total of 291 runs in 45 overs. Their innings had been shortened to 46 overs after play was held up for around an hour and a half due to rain.

Further rain during the innings break saw the target being revised to 235 runs off 33 overs.

Australia had reached 53/3 in nine overs when the proceedings were interrupted by rain once again before the match was abandoned for good.

Both teams got one point each.

Fast bowler Adam Milne was the pick of the Kiwi bowlers with figures of 2/9 in two overs. His fellwo pacer Trent Boult had struck the first blow for New Zealand, picking up the wicket of the dangerous David Warner in the sixth over.

Earlier, New Zealand rode on a century by Kane Williamson and excellent batting by Luke Ronchi and Ross Taylor to post a challenging total.

Williamson led the Kiwi charge with a solid innings of 100 runs before being run out. His 97-ball innings included eight boundaries and three sixes.

Ronchi chipped in with a quick fire 65 off 43 deliveries which included nine boundaries and three sixes.

Taylor on the other hand, was unlucky to miss out on what would have been a well deserved half century as he was dismissed on 46, hitting six boundaries during his 58-ball stay at the crease.

Fast bowler Josh Hazlewood produced an excellent display of pace bowling to return figures of 6/52, three of those wickets coming off four deliveries in the penultimate over of the innings.

Fellow pacer John Hastings had figures of 2/69 while fast bowler Pat Cummins got one wicket.

Electing to bat first on winning the toss, New Zealand were off to a steady start as openers Ronchi and Martin Guptill took the total to 40 runs in the sixth over.

Hazlewood struck the first blow for Australia when Guptill was outfoxed by a bit of extra bounce and was caught by Glenn Maxwell at point.

A heavy drizzle led to suspension of play for around one and a half hours forcing the officials to reduce the match to 46 overs a side.

Williamson and Ronchi however, did not let the break affect their focus, adding 77 runs between them off 60 balls.

Hastings brought the partnership to an end when he sent Ronchi back to the pavilion, courtesy another excellent catch at point by Maxwell.

Williamson and Taylor then put together 99 runs in 18.1 overs to put the Kiwis on course for a big total.

Taylor was dismissed when he mistimed a slower ball from Hastings, offering a simple top edge to Moises Henriques in the covers.

Williamson completed his century exactly five overs later, smashing Hastings for a boundary before taking a quick single to reach triple figures, his ninth in One-Day Internationals and his first against Australia.

The right-hander was dismissed off the very next ball he faced when he was run out thanks to an accurate throw by Cummins.

Williamson’s departure heralded a mini collapse by the Kiwis as they lost the remaining six wickets over the next six overs.

Hazlewood clinched the wickets of Adam Milne, Mitchell Santner and Trent Boult in the 45th over to bring the curtains down on the New Zealand innings.