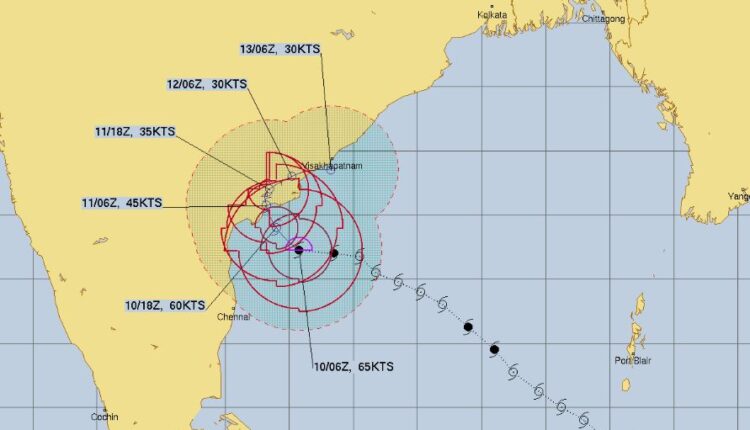 Bhubaneswar: Cyclone ‘Asani’ over the Bay of Bengal may make its landfall near Gudivada in Andhra Pradesh, predicted Joint Typhoon Warning Center (JTWC) of the United States, today.

The JTWC further forecasted that after landfall, the system may exit back into the Bay of Bengal near Visakhapatnam.

“The cyclonic storm may make landfall within the next 24 hours near the eastern India coast between Gudivada and exit near Visakhapatnam. Once the system finally exits back into the Bay of Bengal, it will encounter warm water. However, it will be offset by a sharp drop in ocean heat content and drier offshore flow with increasing vertical wind shear. The shear will ultimately weaken the low-level vortex as it drifts to the north in the northern Bay of Bengal,” the JTWC said.

On the other hand, the India Meteorological Department (IMD) predicted that the cyclone is very likely to move nearly northwestwards and reach Westcentral Bay of Bengal close to Kakinada-Visakhapatnam coasts by 11th May morning. Thereafter, it is very likely to recurve slowly north-northeastwards and move along Andhra Pradesh coast between Kakinada and Visakhapatnam, and then emerge into Northwest Bay of Bengal off North Andhra Pradesh and Odisha coasts. It is likely to weaken gradually into a Cyclonic Storm by 11th May morning and into a depression by 12th May morning.

As per IMD’s forecast path of the system, the cyclone is likely to make landfall near Katrenikona in Andhra Pradesh.

The agency also issued rainfall and wind warning in connection with the cyclone.