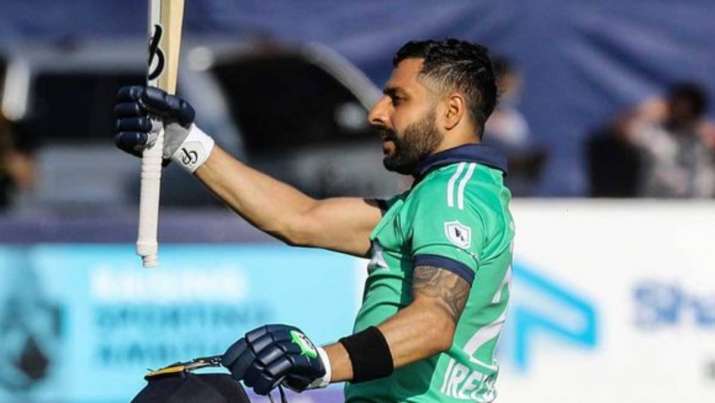 Dublin: Simi Singh, a former Punjab age-group cricketer, who failed to make the senior state side and then shifted to Ireland where he has got to play for the national side, went down in record books as the first player to score a century while batting at No. 8 in One-Day International cricket.

The 34-year-old Singh hit 100 not out off 91 deliveries (14x4s) in Ireland’s 70-run loss to South Africa in the third and final ODI. Before Singh’s century, Sam Curran’s 95 not out against India in Pune on March 28 this year and Chris Woakes’s 95 not out against Sri Lanka in Nottingham in 2016 were the highest in the No. 8 position in ODI cricket.

“Simi spends more time in the nets than anyone else,” Ireland captain Andrew Balbirnie was quoted as saying by Irish Times. “He works so hard on his game and has grown into a top all-rounder for us,” Balbirnie added after the 3-match series ended in a 1-1 draw.

Singh, who bowls off-spin, also took the wicket of Quinton de Kock, who made 120 off 91 deliveries and stitched a 225-run partnership with fellow opener Janneman Malan (177 off 169 balls).

“I thought he also bowled well today and to get his maiden century from number eight was a credit not just to him but to the guys who hung around with him,” said Balbirnie further.

Singh hails from Mohali and played age-group cricket for Punjab. After failing to play at the highest level for the state, he went to Ireland in 2006. He earned an ECB Level 2 coaching degree and certificate as personal trainer.
A few years back he got Irish citizenship.

He also worked in stores, cleaned toilets and then began coaching cricket to schoolchildren.

“I was worried when I returned to India in 2008 after my student visa expired. I had nothing else to do. While I could keep paying extra money to extend my student visa that wouldn’t have got me permanent residency and my hard work playing for Malahide CC made my life,” Simi was quoted as saying by Hindustan Times newspaper in an article published in 2017.

“Two years later, I got a call from YMCA, a top-tier club. That was the club which helped me get a two-year work permit. In 2013, I performed well for them. I scored close to 800 runs and picked 55 wickets. That two-year period got a lot of pressure off my back and now I see my game flourishing,” Simi had said.

No trace of Covid-19 vaccine in breast milk, study suggests