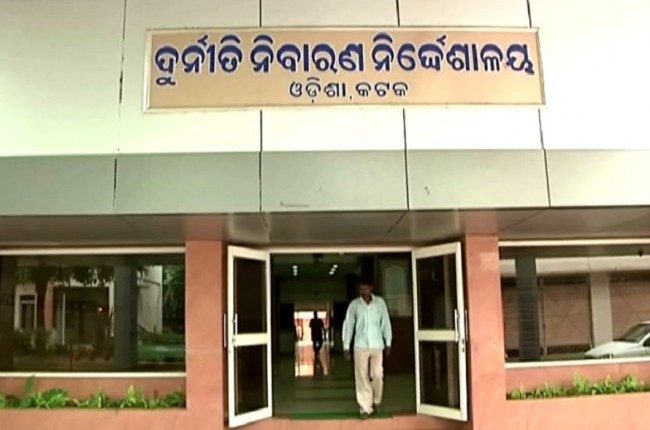 Bhubaneswar: The State Vigilance today booked three government officials including a Superintending Engineer on graft charges. A large amount of cash was also seized from the possession of the three officials.

Sources at the State Vigilance said one of the three officials has been arrested and forwarded to the court.

Based on accusations against Bidhan Chandra Sahu, Superintending Engineer, Irrigation Baitarini Division, Salapada in Keonjhar district of collecting cash illegally from different sources, a team of the Odisha Vigilance kept a close watch over his movement and activities Sahu.

Today, the team of Vigilance intercepted him at N.C. College Road in front of Covid Hospital, Jajpur town. He was going from Salapada to Cuttack by the office Bolero vehicle. During search Rs 10,07,620 cash was recovered from Sahu, which he could not account for satisfactorily.

The Vigilance officials seized the cash as well as Bolero vehicle following the search. Sahu’s office room at Salapada and residential house at Mahatab Road, Cuttack were searched.

In another case, on receipt of reliable information regarding collection of huge cash by Prakash Kumar Mohapatra, Regional Officer, State Pollution Control Board, Panposh, Rourkela as illegal gratification from different sources, a team of Odisha Vigilance has been keeping a close watch over the movement and activities of Mohapatra for past few days.

Accordingly, today the team of Odisha Vigilance intercepted him at Sundarpada, Bhubaneswar, while he was returning from Rourkela. During interception, a sum of Rs 1,75,810 was recovered from Mohapatra, which he could not account for satisfactorily. The cash as well as incriminating documents have been seized. His residential house at HiTech Plaza, Sundarpada, Bhubaneswar was also searched.

In this connection, Bhubaneswar Vigilance PS case No.29 dt.09.10.2021 U/s 7(a)/13 (2) r/w 13(1) (b) Prevention of Corruption (Amendment) Act, 2018 has been registered against Mohapatra.
Vigilance official said Mohapatra has been arrested and is being forwarded to the Court. The investigation of the case is in progress.

Also read: Superintendent Of Excise In Vigilance Net In Odisha

Another Cuttack Vigilance PS Case No. 17 dt.09.10.2021 U/s 7(a)/13 (2) r/w 13(1) (b) Prevention of Corruption (Amendment) Act, 2018 has been registered against Narottam Behera, Regional Officer, State Pollution Control Board, Balasore. While going towards to Bhubaneswar from Balasore by a hired Innova car, the Vigilance intercepted today Behera at Tangi check gate, Cuttack.

During a search, a sum of Rs 89,290 was recovered from Behera, which he could not account for satisfactorily. The cash as well as Innova car have been seized.

His office room and residential Govt. quarter, and his rented house at Satyanagar, Bhubaneswar were searched and investigation is in progress.