‘I’ll resign from my job & be a servant to you’: deceased ACF’s letter to wife surfaces 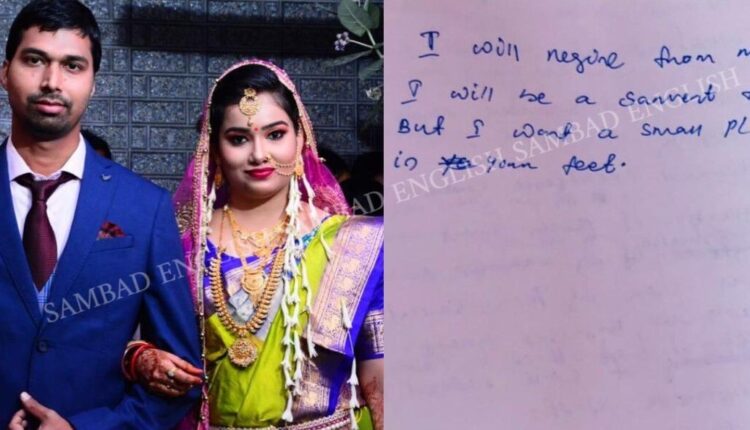 Paralakhemundi: With the death mystery of Paralakhemundi ACF Saumya Ranjan Mohapatra continues to confound, a handwritten note purportedly written by the deceased has come to fore revealing shocking details.

The note handed over by the deceased ACF’s advocate indicates that the former was ready to sacrifice everything for his wife.

Whatever you want, I will make arrangements for that. I’ll definitely fulfill that. I will resign from my job and be a servant to you. But I want a small place in your feet.

I don’t want your qualification, I won’t ever tell you anything about this. I just need you as my wife and a good friend.

What further deepens the mystery is that he wrote, “After this, if anything happens.. if any small thing happens, I won’t play any role.. I won’t explain anything. I won’t tell anything. At the last, whatever she decides, she is fine to do. If I interrupt at that time by saying anything for it punishment, she can put a case of domestic violence against me.”

Also Read: ACF Death Mystery: Accused DFO To Be Interrogated In Due Time

Meanwhile, ACF’s wife Bidyabharati and ambulance driver were interrogated yesterday. Today, accused DFO Sangram Keshari Behera will be grilled by police in connection with the incident.