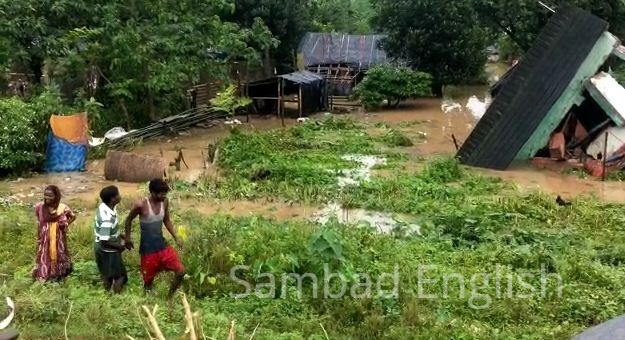 Baripada: Several low-lying areas of Odisha’s Baripada town have been inundated due to incessant rainfall in the region. The town recorded 186 mm of rainfall during the last 24 hours.

Jarali and Sarali canals flowing through the town swelled up after heavy rainfall resulting in flooding of areas along the two canals. Floodwater rushed into the houses near the canals causing severe inconvenience for the residents. The affected ones were being shifted to the nearby cyclone shelters.

On the other hand, the water level of Jalaka river crossed danger mark at Mathani in Basta area of Balasore district. Water was reportedly flowing at 6.42 m this morning while the danger level is 5.50 m.

Situation was similar in Keonjhar town as residential areas like Bhalukipatala, Baladevjew Colony, Sponge Colony and Forest Colony have been marooned. Rainfall of 134.4 mm has been recorded in the town during the last 24 hours.