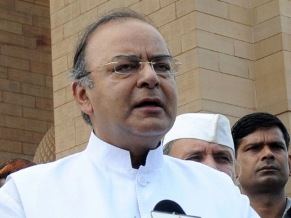 Finance Minister Arun Jaitley on Tuesday moved the Finance Bill, 2017, for consideration and passage in the Lok Sabha, saying that since it provides for electoral bonds, it required consideration as a Money Bill, which can only be debated in the Lower House.

A Finance Bill is ordinarily introduced to give effect to the financial proposals of the government for the next financial year.

Replying to a point of order raised by an opposition member of the House, Jaitley said that following the government’s demonetisation drive to curb corruption, various income tax incentives had been introduced, including electoral bonds, to deal with black money in political life. This had necessitated amendments to various Acts, he said.

“These define the procedure how electoral bonds are to be issued, which says that the Reserve Bank (RBI) will, with particular banks, issue electoral bonds,” he said.

“The RBI Act required an amendment in this case so that it may notify a particular bank. For this provision, RBI, as well as the Representation of People Act are amended,” he added.

On Monday, the Lok Sabha by voice vote passed the third batch of Supplementary Demand for Grants for 2016-17.

The House also passed the relevant appropriation Bills for drawing the specified sums out of the Consolidated Fund of India.

Jaitley had on Friday tabled the third batch of Supplementary Demands for Grants for 2016-17, seeking approval for additional expenditure of Rs 11.35 lakh crore, including net cash outgo of Rs 14,786.85 crore towards various heads. (IANS)

Maoists kill one abductee, release other in Odisha’s Rayagada