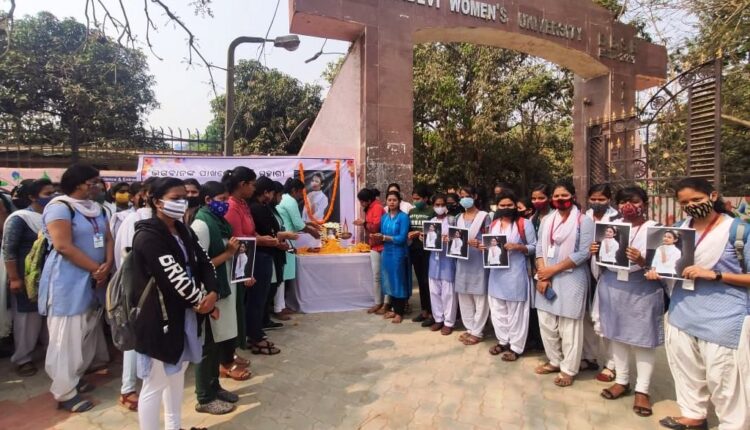 Bhubaneswar: Following death of Jharaphula Nayak, Ramadevi Women’s University in Bhubaneswar has been in a state of trauma since past four days.

Even as Jharaphula is no more, her friends, teachers and entire varsity campus cannot believe her untimely departure from the world. All are found to be in shock after losing a bright student, who died mysteriously in the city.

Mourning the death of Jharaphula, the students of State’s premier women university bid a tearful adieu to the soul at the campus yesterday. They expressed extreme grief over sudden demise of the student demanding a detailed investigation into the death mystery.

Jharaphula Nayak, a resident of Jashipur area in Mayurbhanj district, died under mysterious circumstances after she reportedly spent a night with her alleged beau at a private guest house on January 26 in Bhubaneswar. Her body was carried on a scooter by two persons including her boyfriend and dumped near Kuakhia in Jajpur district next morning.

Read: Jharaphula Stayed At Hotel In Bhubaneswar With ‘Lover’ On Jan 26 !

Four days after her death, the premises of varsity is apparently found withered and lifeless. Her friends and teachers have been stunned after hearing death news.

Also Read: Jharaphula Nayak Death: Here’s Why The Girl Had Gone To Bhubaneswar From Mayurbhanj

The Commissionerate Police arrested one person identified as Rakesh Swain, Jharaphula’s alleged lover, in connection with death of the college girl. The accused was handed over to the Kuakhia Police in Jajpur district for further investigation following which a case has been registered against him under sections 302 and 201 of IPC as well as Scheduled Caste and Scheduled Tribe (Prevention of Atrocities) Act.

The accused was produced before the district court in Jajpur yesterday. The police have filed an application seeking 5-day remand of the youth for interrogation in the case. The court has scheduled the hearing for February 1. The accused has been sent to judicial custody.

[Watch] Another CCTV footage of Jharaphula, alleged lover having lunch in Dhaba surfaces