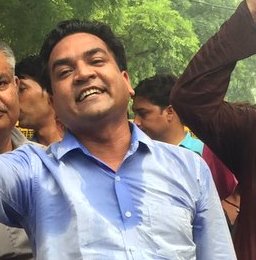 Sacked Delhi Minister Kapil Mishra, along with 25 supporters and the mother of a deceased AAP volunteer, was stopped by police from attending Chief Minister Arvind Kejriwal’s Janata Darbar here on Friday.

The suspended AAP leader tried to barge through the police barricades, but was stopped.

Mishra and his supporters then sat down on protest outside the Chief Minister’s residence. He said he would not budge till the ‘Darbar’ was over.

Mishra also took a potshot at Kejriwal, and said: “Why is Kejriwal not sacking Satyendar Jain (Health Minister) despite several serious allegations against him?”

Mishra arrived at the Chief Minister’s residence along with the mother of AAP volunteer Santosh Koli, who died in a road accident in August 2013. He demanded a Central Bureau of Investigation (CBI) probe into Koli’s death.

Mishra said he wanted to meet the Chief Minister and hand him a copy of the proposals passed at the India Against Corruption-2 convention on June 3. (IANS)