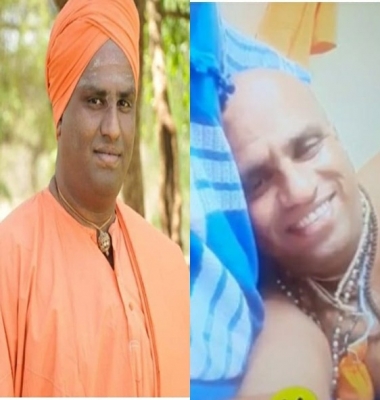 Ramnagar (Karnataka): Police in Karnataka said on Monday that investigations into the suicide case of a Lingayat seer have revealed that vengeance and greed were the reasons behind honey trapping and torturing the victim.

Basavalinga Sree had committed suicide on October 24 in the premises of the Kunchugal Bande Mutt in Ramnagar district.

Kudur police who cracked the case and arrested three persons, including an engineering student, in connection have continued their probe and are likely to nab more persons.

The arrested persons Mrutyunjaya Swamiji of Kannuru Mutt; Neelambike aka Chanda from Doddaballapur; and Mahadevaiah, an advocate from Tumakuru, have confessed to the crime and told the police that they had a deep hatred for the deceased seer and wanted to dethrone him.

According to the police, Mrutyunjaya Swamiji was eying on the throne of the cash rich Kanchugal Bade Mutt which had a large following of devotees, owned more than 80 acres of land near Bengaluru, reserved funds and ran a number of education institutions.

Mrutyunjaya Swamiji, a cousin of deceased seer, was dependent on Siddaganga Mutt of Tumakuru for funds to manage the show.

But, the Siddaganga Mutt had distanced itself from the accused seer.

Mrutynjaya Swamiji nursed a deep grudge against the deceased seer for complaining against him to the Siddganga, the police said.

He fought with the victim and hatched a conspiracy to dethrone him by honey trapping and taking over as the head of his mutt as revenge.

He used the other accused, Neelambike, as a sparrow.

Neelambike had a good rapport with seers of Lingayat mutts, including the victim

She was angry at him as he recorded her conversation bad mouthing other seers and sent the audio clip to those swamijis.

Advocate Mahadevaiah also joined hands with the two and hatched a conspiracy eight months ago.

Neelambike trapped the deceased seer and got the audio and video clips and handed it over to the accused seer. The advocate got them edited and used it for blackmailing.

The accused thought that Basavalinga Sri would step down, but their plan failed when he took his own life.