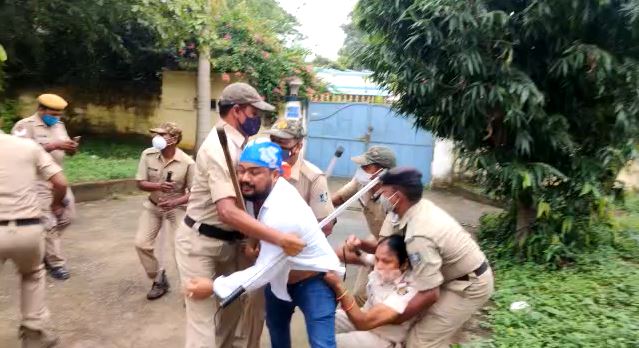 Bhubaneswar: The alleged murder of 24-year-old schoolteacher Mamita Meher of Balangir district has stirred the political pot of Odisha with opposition parties alleging involvement of Minister of State (Home) Dibyashankar Mishra in the case.

While both the parties have been strongly demanding removal of the concerned Minister since yesterday, members of Odisha Congress’ student wing today hurled eggs at his Government residential quarters here. The agitators led by Chhatra Congress President Yashir Nawaz also attempted to barge inside the Government quarters during their protest. They reiterated the demand for immediate dismissal of the Minister.

Later, police personnel reached the spot and picked up the protesters to avoid any unpleasant situation.

On the other hand, a five-member team of BJP Mahila Morcha will visit Mahaling in Kalahandi district tomorrow to meet family of the deceased, police and authorities of Sunshine Public school, where Mamita worked as a teacher.

Meanwhile, Kalahandi Zilla Parishad Chairperson Namitarani Sahu alleged that many ministers were involved in the missing and alleged murder of the teacher. She alleged that the woman was raped and killed before being dumped at the under-construction stadium of the school.

‘Special Ops 1.5’ is all about early years of Himmat Singh. Watch trailer here