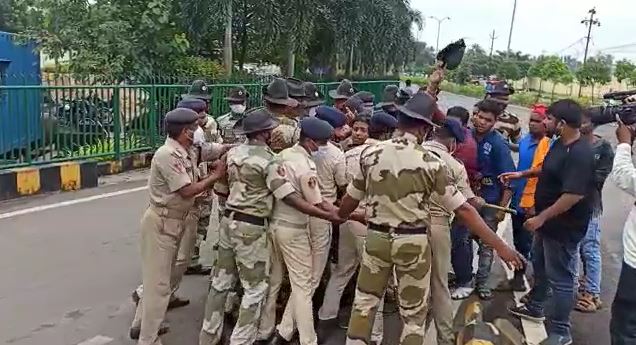 Bhubaneswar: A day after the arrest of Govind Sahu, prime accused in schoolteacher Mamita Meher murder case, shutdown, demonstration and Padayatra by opposition parties marked widespread protests in Kalahandi and Balangir districts as well as in the state capital.

While Opposition BJP is observing 12-hour bandh in Kalahandi today, members of Congress’ youth wing staged demonstration in front of the residence of Chief Minister Naveen Patnaik here alleging involvement of Minister of State (MoS) Home Dibya Shankar Mishra in the incident. They demanded that the concerned Minister resign from his position or the CM dismiss him forthwith.

Shouting anti-Government slogans and showing black flags, the Congress members said crimes against women are on rise in the state as the Government has failed to provide protection to them. Later, the protesters attempted to barge inside Naveen Niwas. However, security personnel deployed outside the CM’s residence stopped the activists, who were later detained by Airfield police.

“We tried to meet the CM to seek justice for the 24-year-old girl but were picked up by police personnel midway. On the other hand,  the Government is protecting the Minister, who is directly involved in the case,” said Odisha Youth Congress President Smruti Ranjan Lenka.

In Bhawanipatna of Kalahandi district, Youth Congress took out a Padayatra as a mark of protest over the murder case.

Congress Legislative Party (CLP) Leader Narasingha Mishra visited the girl’s family in Balangir district and said perpetrators of the crime should not be spared.

Horrifying news coming out on the Mamita Meher missing case. I am visiting the girl’s family today. The perpetrators of the crime should not be spared no matter high or mighty they are.

Besides, over a hundred members of Opposition BJP led by MP Sangeeta Kumari Singh Deo gheraoed the Balangir SP’s office today. Police forces were deployed to control the situation. The party has demanded a probe into the incident by Central Bureau of Investigation (CBI).

On the other hand, two separate delegations of BJP and Congress led by Sameer Mohanty and Santosh Singh Saluja, respectively, met Governor Ganeshi Lal and submitted memorandum seeking his intervention for ensuring an impartial probe into the incident. Both the delegation also sought dismissal of Minister Dibya Shankar Mishra for his alleged involvement.

Meanwhile, security has been beefed up outside the Government residential quarters of Minsters Dibya Shankar Mishra and Pratap Jena to avert any unpleasant situation.

In a latest development in investigation of the case,  during interrogation prime accused Govind Sahu has confessed that he killed the Mamita and later buried her body. Sahu was president of the School Management Committee (SMC) of Sunshine Model School, Mahaling in Kalahandi district, where the deceased worked as a teacher.