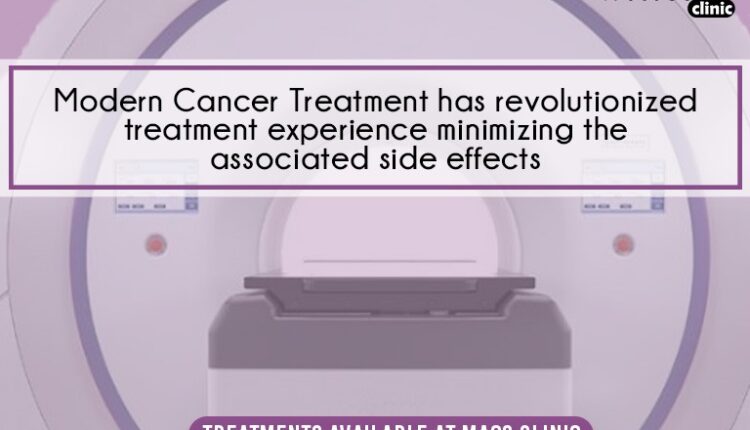 Bhubaneswar: Treating cancer is challenging as it is essential to zero down to the most suitable treatment that ensures total eradication of cancer. Today, cancer treatment has become simpler and less morbid; patients experience fewer after-effects. Immense and valuable changes in treating cancer have eased the lives of cancer patients to a great extent and motivated them towards healthier and meaningful living.

Dr. Sandeep Nayak, leading surgical oncologist in India, shares valuable insights on how modern cancer treatments effectively treat cancer with minimal side effects for two of the most common cancers we see.

Breast-conserving surgeries are also referred to lumpectomy, partial mastectomy, segmental mastectomy, or quadrantectomy, depending upon the extent of tissue removed. The main advantage of breast-conserving surgeries is that much of the breast is preserved in appearance. The patient does not lose her self-esteem as most of the breast is conserved. Moreover, it is a less invasive surgery implying early recovery and less pain than a mastectomy and yet has an equal or better cure rate.

The sentinel lymph node biopsy proves helpful in ascertaining if the breast cancer cells have spread into the lymphatic system in the armpit. Through this biopsy, oncologists get a fair estimate of the likelihood of cancer spreading to the other parts of the body. A sentinel lymph node is the first lymph node associated with a primary tumor.

A positive sentinel lymph node biopsy report indicates the need for removing more lymph nodes. In contrast, a negative biopsy suggests less risk of the spread of cancer, which reduces the extent of complications associated with removing lymph nodes.

Sentinel lymph node biopsy (SNB) was developed to reduce the occurrence of lymphedema caused by removing lymph nodes. In addition, oncologists refer to the Sentinel node biopsy to plan future cancer treatment. Sentinel lymph node biopsy is definitely an improvement from lymphadenectomy, which comes with its share of complications. The main complication that we are worried about is the swelling of the arm and hand, which can happen in 40-50% of patients who undergo complete removal of lymphnodes. Whereas, the patients whose sentinel nodes have been removed have very little risk of arm swelling up.

The SNB detection tests currently use indocyanine green ICG instead of using radioactive material which used to be used. Many of the centers have switched to this new technique. This special dye is safer and more effective than nuclear medicines, which contain radioactive substances which are cumbersome to use.

TARGIT-Intraoperative Radiation Therapy (IORT) using Intrabeam device is the latest and most benefitting treatment for early-stage breast cancer. The TARGIT-IORT procedure delivers radiation during the lumpectomy to the tumor or the affected tumor area. The main advantages of IORT are that it is a single high radiation dose which is adequate and prevents frequent hospital trips for chemotherapy which could last up to 6 – 8 weeks. Moreover, it is known to eliminate cancer effectively and does not affect the healthy tissues in the breast.

Also, several tests such as CanAssist Breast, OncotypeDX, and other risk stratification tests have made it possible to reduce or do away with chemotherapy with good results in breast cancer patients. These tests identify those patients who won’t benefit from chemotherapy. This helps many patients who otherwise would have had to go through chemotherapy with no added benefit.

Dr. Sandeep Nayak, one of the leading onco-surgeon in Bangalore, is distressed with the increasing incidence of oral cancer in India. However, he notes that precision surgery in treating oral cancer patients has proven successful.

Today, robotic surgery promises same oncological resultswith better comfort than open surgeries in the treatment of oral cancer. Robotic surgery for oral cancer promises precision surgery with just 3 or 5 incisions with few side effects or scars with better results and speedy recoveries. The neck is left with no wound or scar, which results in a quick recovery. Many of the patients require radiation following surgery. These patients can start radiation earlier than open surgery which may result in a better overall result.

Similarly, robotic thyroid surgery technique called RABIT is a scar-free thyroidectomy that promises small scars in size tucked away in the armpit against the 7- 10 cm’s visible long scar on the frontal neck region, diminishing the patient’s confidence and causing a great deal of embarrassment. Also, vital structures in the neck are saved while the thyroid gland is removed. Though RABIT for thyroid was developed for the purpose of avoiding a neck scar over the years we have realized that it also improves the quality of surgery due to the precision of the robotics, 3D magnified image, Firefly technology and many other technological advancements that it provides. 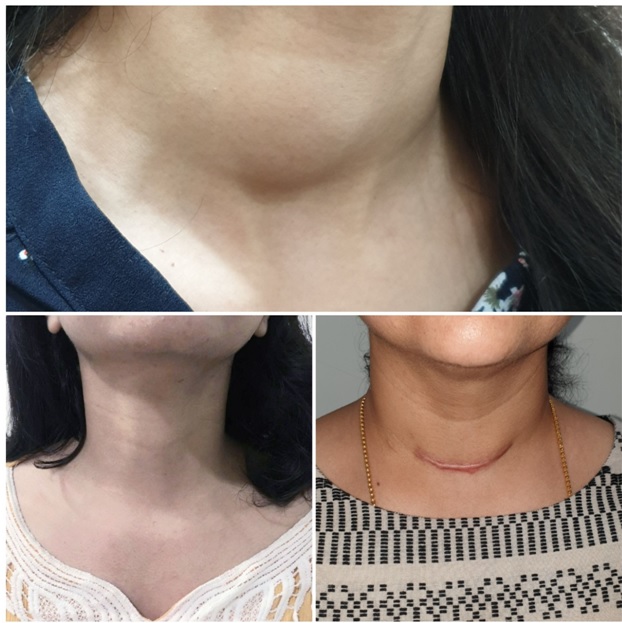 Also, robotic surgery is nearly scarless against the possible risk of visible hypertrophic and keloid scars of open surgery. Robotic surgery marks a paradigm shift from open neck surgery as vital neck structures like the recurrent laryngeal nerve which is responsible for voice and parathyroid gland that is responsible for calcium are saved better.