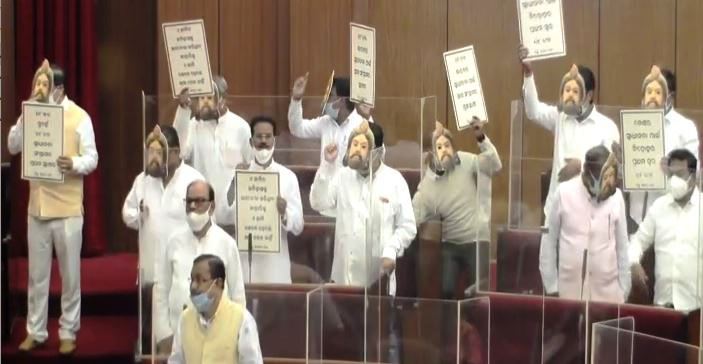 Bhubaneswar: Pandemonium continued to prevail in State Legislative Assembly on the fifth day of the Winter Session today as members of ruling BJD and Opposition BJP held protests over different issues compelling the Speaking to adjourn the House till 4 pm.

Soon after the House assembled, BJP members stood up and staged protest demanding dismissal of Minister of State (Home) for his alleged link with Govind Sahu, the prime accused in the sensational schoolteacher Mamita Meher murder case. A group of MLAs of the saffron party also went to the Well of the House and later gheraoed and climbed up the Speaker’s podium as a mark of protest.

On the other hand, BJD MLAs raised the demand for declaration of Paika Rebellion as the country’s first war of independence against the British Empire.

As December 6 (today) marks the death anniversary of Jayi Rajguru, who spearheaded Paika Rebellion in 1817, BJD MLAs  wearing masks of the freedom fighter and holding placards got up from their seats and raised slogans slamming the Centre for its alleged negligence in according the said recognition.

Following the adjournment, the ruling party MLAs sat on a dharna near Gandhi statue on the premises of the state Assembly.

“Paika Rebellion (Sipahi Bidroha) is the symbol of Odisha’s bravery, patriotism and the struggle and sacrifices to achieve freedom,” said the agitating BJD members.

Earlier in August this year, Union Minister for Culture and Tourism G Kishan Reddy had informed the Rajya Sabha that the state Government’s demand for declaration of Paika Bidroha as the first war of independence against the British Empire is under consideration of the Centre.

Worth mentioning, the state Government, at a Cabinet meeting held on July 18, 2017, had decided to make a formal demand before the Centre for declaring Paika Rebellion as the first war of Independence in India’s history.

While BJD members staged dharna on the House premises after the adjournment, BJP legislators took out a procession to General Post Office (GPO) Bhubaneswar to post a letter to Chief Minister Naveen Patnaik questioning his Government’s double standard policy on safety of women in the state.

Condemning his silence over Mamita Meher murder case, the party MLAs, in the letter, reiterated the demand for a CBI probe into the incident and dismissal of Minister Dibya Shankar Mishra. They also urged the CM to come the House for restoring normalcy.