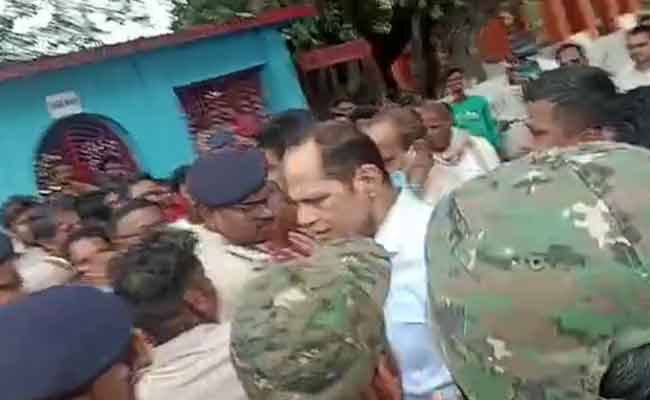 Berhampur: Gopalpur MLA Pradeep Panigrahi was shown black flags by workers of Biju Janata Dal (BJD) while he was on the way to his constituency to hoist the National Flag on Independence Day today.

Sources said the unpleasant situation occurred when the legislator was heading to Kamalapur village under Rangeilunda block in Gnajam district to attend Independence Day celebration this morning.

Shouting slogans against the legislator like “Pradeep Panigrahi haye haye” and “Pradeep Panigrahi Murdabad”, the BJD workers intercepted his vehicle near Kamalapur and created nuisances. They also showed black flags to the legislator. Panigrahi got off the vehicle and tried to pacify the agitators, but in vain. The situation turned ugly further when a scuffle ensued between the MLA’s supporters and the BJD workers on the road.

Later, a police team reached the spot and brought the situation under control. Despite the opposition, the MLA went to Kamalapur and unfurled the Tricolour.

Worth mentioning, the MLA was arrested on December 3, 2020 on charges of collecting money from people on behalf of Akash Kumar Pathak, son of IFS officer Abhay Pathak, on the pretext of providing them jobs in Tata company. In June 2021, the Orissa High Court (HC) granted him bail in job fraud case, registered at Golanthara police station in Ganjam district.