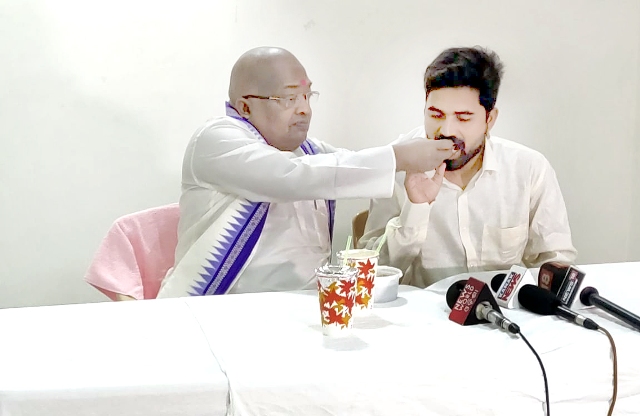 New Delhi/Rourkela: Muktikant Biswal, a youth from Odisha’s Steel City Rourkela, was forced to call off his peaceful strike in Delhi yesterday after failing to get any nod from the Prime Minister’s Office (PMO) to have meeting appointment with Prime Minister Narendra Modi.

He withdrew strike under pressure of the Delhi police who did not allow him to sit on dharna anywhere in the city.

“However, I will continue my movement for the interest of people of Rourkela,” the 29-year-old Muktikant told media after withdrawing strike.

Meanwhile, the Delhi police also threatened him to quit the city as soon as possible.

Muktikant, who had walked 1350 km to meet the Prime Minister, sat on dharna at Jantar Mantar on Sunday urging the PMO to allow him for meeting with Modi.

After failing to meet PM, Odisha youth sits on dharna in…

However, he did not have permission to sit on dharna at Jantar Mantar, he was picked up by the Delhi police and left at Ramlila Ground where he continued protest for two days.

As the youth had no permission from the Delhi for the dharna at Ramlila Ground, the Tilaknagar Marg police took him to the Lok Nayak Jai Prakash Narayan Hospital at Jawaharlal Nehru Marg on Wednesday night for health check-up. He was admitted to ICU after his health condition deteriorated.

Later, police dropped him outside the hospital at around 2.00 am threatening him to leave Delhi.

Worth mentioning, Muktikant had started journey on foot from Rourkela on April 16 covering a distance of 1350 km to meet Prime Minister Modi to remind him of his promises he made to people in the city during 2014 elections.

He approached Union Minister Jual Oram for meeting with the PM. Instead of helping the youth, the minister criticised his mission terming it as ‘Congress Sponsored’.