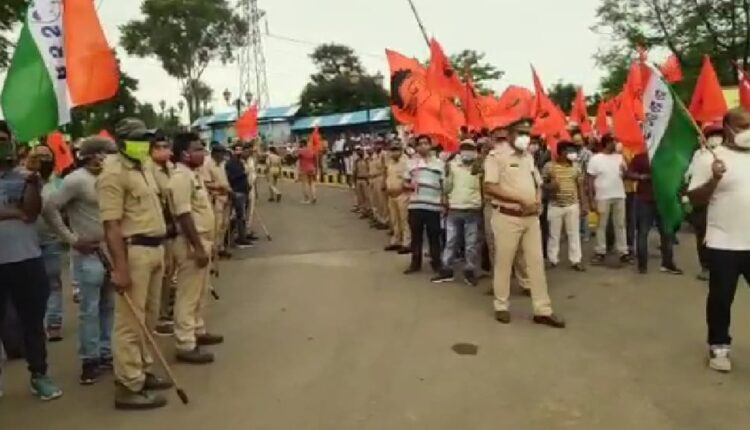 Rourkela: Pressing for immediate wage agreement among other demands, several trade unions today resorted to strike at all SAIL units, including the Rourkela Steel Plant (RSP).

Members of trade unions like CITU, BMS, INTUC, AITUC, Gangpur Mazdoor Manch of RSP and HMS staged dharna in front of the RSP’s main gate and power gate this morning. As part of their protest, they restrained workers from entering the plant hampering it’s operation. As the tension continued till long, police personnel deployed on the spot intervened to bring the situation under control.

Another group of the trade union members staged a demonstration at Bisra Square.

After the virtual meetings of National Joint Committee on Steel (NJCS) held consecutively for six days till Sunday failed to finalise wage revision of SAIL workers, the trade unions had earlier threatened to shut operation at all units, including RSP on Wednesday(today).

Meanwhile, authorities of RSP termed the strike as illegal. Higher officials of different departments of the steel plant are managing operation with contractual workers.

Earlier on Monday,  members of trade unions wore black badges as a mark of protest.

Worth mentioning, non-executives’ wage revision is pending since January 2017. The public sector steel workers’ wage agreement is revised every five years by the NJCS comprising representatives of SAIL management and the central trade unions.

Following strike notice given by the unions across the country, SAIL had started wage negotiation in the NJCS meeting from June 22. In a partial success, its offer of 13 per cent growth in Minimum Guaranteed Benefit (MGB) enhancement on basic pay and Dearness Allowance was accepted.

However, the NJCS meeting ended abruptly on Sunday with SAIL rejecting the demand for growth of perks at par with SAIL executives.

Can’t change rules or give undue relaxation due to Covid-19: Supreme Court on CA exams