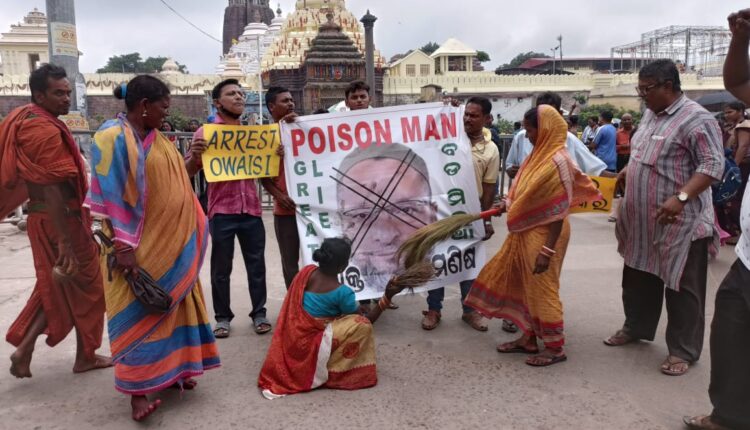 The members of Jagannath Sena staged protest in front of Singhadwar of Srimandir in the pilgrim town demanding arrest of ‘poison man’ Owaisi for his statement. The protestors hit his image on a poster with brooms describing him a ‘ big liar’ and later burnt it.

Earlier, the Puri-based socio-political outfit had lodged a complaint with the Singhadwar police seeking his arrest for his controversial statement on the Jagannath Temple.

The Muslim leader courted controversy after he claimed that the Jagannath Temple was built over a Buddhist monument in Puri.

Addressing a rally in Bhiwandi of Maharashtra in the month of May, the AIMIM MP said, “Swami Vivekananda has written in a book that the Jagannath Temple was constructed after razing a Buddhist worship place.”

Demanding arrest of Owaisi for the statement, Jagannath Sena convener Priyadarshan Pattnaik registered a complaint on June 13 in Puri.

“Hyderabad MP Asaduddin Owaisi is a vicious person. He wants people to indulge in confrontation over religion,” Pattnaik had told reporters.

Benefits of exercise may soon be packaged in a pill