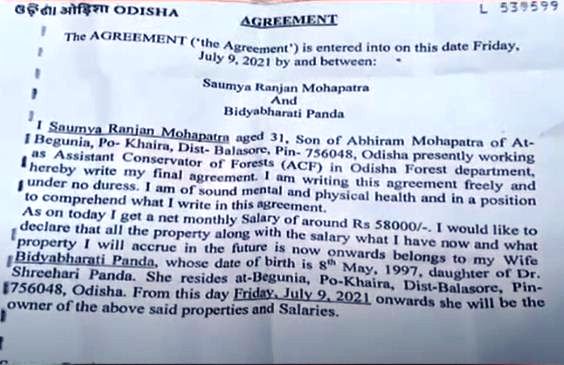 Bhubaneswar: The mystery behind the death of Paralakhemundi Assistant Conservator of Forest (ACF) Saumya Ranjan Mohapatra deepened further as an unsigned agreement paper between the deceased and his wife Bidyabharati Panda, which was prepared couple of days before his demise, has surfaced.

As per the agreement dated July 9, 2021, the photocopy of which has been provided by police to the family members of Mohapatra, the ACF was to transfer the possession of his salary and properties to his wife.

“I would like to declare that all the property along with the salary what I have now and what property I will acquire in the future belongs to my wife Bidyabharati Panda. From July 9, 2021 onwards, she will be the owner of the properties and salaries,” the agreement read.

Mohapatra’s uncle today demanded that the police should investigate to ascertain as to why the agreement paper was prepared couple of days before his death and whose plan it was.

He also demanded that the relationship between Gajapati DFO Sangram Keshari Behera and Bidyabharati should be brought under the purview of the probe.

The DFO and the deceased’s wife came under police scanner after the ACF’s father lodged a written complaint against them and a cook alleging their involvement in the ‘murder’ case.