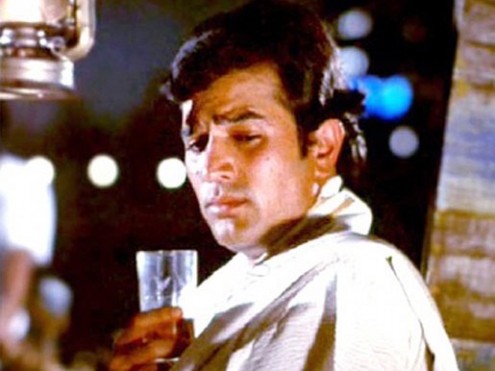 Two days from now, one more year will fade out and become flashback material. Talking of flashbacks, 29th of December has a great significance in the context of Hindi films because it is the birthday of Rajesh Khanna, the first superstar of Hindi films. His birth anniversaries, post his demise on 18th July, 2012, have acquired a sentimental tone and inspire film buffs to take a walk down sepia-tinted memory lane.

For Hindi film lovers, who were in school and college in the 1970s, the very name Rajesh Khanna is enough to trigger a flood of memories. Memories of some great films. Memories of fun, frenzy, humor and rumor.

The film buffs of Shah Rukh-Salman-Amir-Saif-Ajay-Akshay-Hrithik-Ranvir generation might find it immensely difficult to comprehend the craze that Jatin Khanna alias Rajesh Khanna alias Kaka (means kid in Punjabi) created between the year 1969 and 1974.

It all started when this1942-born pampered son of Punjabi parents, qualified in the United Producers-Filmfare talent search contest, sometime in the mid-1960s. His initial films like Raaz, Bandhan, Baharon Ke Sapne, Ittefaq, Aakhri Khat did not exactly set the box office on fire, but were still eminently watchable.

And then came 1969, when Shakti Samanta’s Aradhana and Raj Khosla’s Do Raaste released within a few months of each other and a whole new chapter began in Hindi film history. Rajesh Khanna’s emergence as the first ever superstar on the Eastman color horizon of Hindi films, at the cusp of two decades was very symbolic. He heralded a new era on the silver screen: of roses, romance, love songs, mirth, music and moist eyes.

It is not that heroes who preceded Rajesh Khanna were not popular. The triumvirate of Raj Kapoor-Dev Anand-Dillip Kumar or – for that matter – Shammi Kapoor, Rajendra Kumar, Manoj Kumar, Dharmendra and Jeetendra, enjoyed large fan followings.

But the kind of attention that Rajesh Khanna drew after the release of Aradhana and the popularity that he achieved with his subsequent films were unprecedented.

His sweeping popularity and magical impact on the youth became thesis material for film critics and sociologists of the time. His on-screen persona and off-screen personality became chapters in university syllabus.

Fans getting married to his photographs, writing letters to him with their blood are part of film folklore now. His hairstyle and dress code too set trends. Interestingly enough, in the film ‘Guddi’ (1971), even Dharmendra at one place refers to the Rajesh mania. In the laugh riot ‘Bombay To Goa’ (1971), Mehmood and his brother Anwar Ali play characters who are great fans of Rajesh Khanna and divide his name between themselves. Mehmood is called ‘Rajesh’ and Anwar is named ‘Khanna’. These cinematic salutes give an indication of the hysteria that Rajesh Khanna unleashed.

There was no television at the time for breathless promotion. Films also didn’t release in 1000 theatres simultaneously, courtesy UFO.  Instead, films in that era took months after release to reach small centers and still were eagerly awaited and avidly watched. With 15 super duper hits back to back even in these times of limited communication, Rajesh Khanna was anointed the first superstar of the sub-continent.

But ‘the Phenomenon’ (some say, famous publicist Bunny Ruben coined it for Rajesh Khanna and very cleverly planted it in media circles) had a very brief rule of only five years. The hit run that started with Aradhana (1969), ended with Roti (1974). After that, a long and tragic downhill journey started, with stray consolations like Prem Kahani, Dhanwan, Amardeep, Thodi Si Bewafai, Souten, Avataar, Agar Tum Na Hote happening at irregular intervals.

May be Rajesh Khanna lacked foresight. Perhaps, he could not organize his career like a true professional. Also it was rumored that he fell into bad company of sycophants and spongers who converted him into an arrogant and undisciplined spoilt brat.

To add to this, the decade of 1970s was a time of great political and social upheavals. The Indo-Pak war, the Railway strike, unemployment, price rise and – to cap it all – the Emergency, all warranted cinematic reproduction. And Rajesh Khanna, with his romantic persona could not fulfill the new angst ridden demands of the viewers.

In that critical hour arrived Amitabh Bachchan. He fitted the bill and hijacked all the billboard space that was once reserved for Rajesh Khanna. With Amitabh’s emergence, the alphabets and idioms of cinematic expression too underwent a total transformation. Romance was replaced with rage, amor with angst.  Smoldering and seething anger smoked out soulful songs. The tall, lanky, brooding rebel usurped the throne, dislodging the besotted balladeer. Anand lost out to Vijay. The songster to gangster.

But in retrospect, one will like to overlook the Khanna-Bachchan rivalry. It is much more rewarding to brood over movies like Anand and Namak Haram—movies which became masterpieces because of their magical pairing and marvelous performances. Well, Hrishikesh Mukherjee deserves a special mention for this feat.

And when one looks back through the mist of bygone years, one likes to forget the fall of a Phenomenon that was Rajesh Khanna. Instead one will like to remember his celluloid classics like Safar, Amar Prem, Kati Patang, Daag, Aap Ki Kasam and many more: films which were rewarding cinematic experiences then and are nice memories now. All because of his sensitive portrayal.

And one day, in that very city, he breathed his last and became lasting memory. The icon became ashes and metaphysics and faded into immortality.

* The author, a film maker, is an alumnus of FTII, Pune and is active in Film and Television sector for the last twenty years. Presently, he is based in Bhubaneswar, Odisha. He can be contacted at [email protected]

Shame: Minor girl locked up in room, raped for a week in Odisha capital