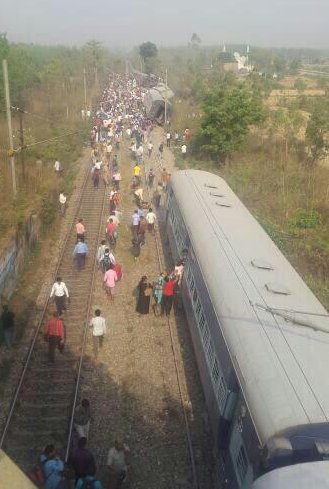 At least two passengers were injured when eight coaches of the Rajya Rani Express derailed near Rampur in Uttar Pradesh on Saturday morning, officials said.

According to a senior railway official, the train bound to Lucknow from Meerut derailed around 8.15 a.m. between Mundapandey and Rampur near a bridge over the Kosi river.

The injured persons were rushed to a nearby hospital.

At least 25 trains were affected due to the accident at the Meerut-Bareilly section.

Railways Minister Suresh Prabhu ordered an enquiry into the incident, saying “strict action will be taken against any lapse”.

At least 149 passengers died and over 300 injured when 14 coaches of the Patna-Indore Express derailed near Kanpur on November 20 last year.

In January this year, 32 persons died and over 50 injured when Hirakhand Express derailed near Vizianagaram in Andhra Pradesh and 13 passengers were injured in March when eight coaches of the Mahakaushal express derailed in Uttar Pradesh’s Mahoba district. (IANS)

Tips for getting rid of body odour in summer

Antarctica was once covered by lush forests: Scientists