The train would cover prominent heritage and pilgrimage destinations of Bihar, Uttar Pradesh, Odisha and Jharkhand 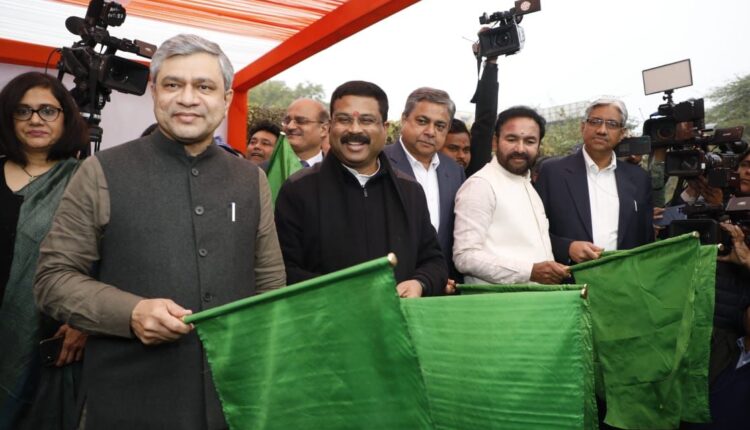 The tourist train, launched under the Dekho Apna Desh initiative of the Central government, would cover prominent heritage and pilgrimage destinations of Bihar, Uttar Pradesh, Odisha and Jharkhand.

As many as 528 pilgrims, on board the train, will have the opportunity to visit religious places like Varanasi, Gaya and Baidyanath Dham, apart from the holy city of Puri in Odisha.

Tourists will also have options to board or de-board the train at Aligarh, Ghaziabad, Tundla, Kanpur, Etawah, and Lucknow stations.

The train would make its first stoppage at Varanasi thereby enabling the tourists to visit the Kashi Vishwanath temple and the corridor connecting it with the ghats of River Ganga. The tourists can witness the Aarti on the banks of the great river, Railways sources said.

The tour would then proceed to Jharkhand and the tourists would have the opportunity to visit Baidyanath Dham temple. Soon after that, the train would travel to Puri, where a two-night stay would be arranged in hotels. The tourists will get the opportunity to visit the Golden Beach of Puri, Jagannath temple, the Sun temple at Konark and shrines in Bhubaneswar, they added.

Gaya will be the last destination of the tour and then the train will return to Delhi on the eighth day of its journey on February 1.

Under the Bharat Gaurav Tourist Train programme, the IRCTC provided packages at an economical rate starting from Rs 17,655 per person for the tour, sources said.

“The Jagannath Yatra is a spiritual sojourn under the Bharat Gaurav initiative of the Ministry of Railways. It will encourage citizens to experience the divinity of Kashi, Gaya, Deoghar, Bhubaneswar, Konark, Puri and more. The Yatra is Prime Minister Narendra Modi’s gift to the devotees of Mahaprabhu Jagannath, Mahadev Shiva and Lord Budhha. It is a great initiative to further the spirit of Ek Bharat, Shestha Bharat and give a boost to domestic tourism,” said Pradhan in a series of twitter posts.